Index of Posts on True Simplicity 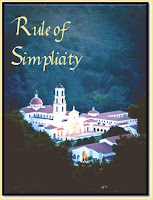 This is the list of posts for discussing Dietrich von Hildebrand's chapter on True Simplicity in his excellent book Transformation in Christ. The link will take you to the Google preview. I'm trying to work it in with a study of St Benedict's Rule -- we'll see how that goes but the Rule contains a lot of practical advice targeted towards simplicity which can apply somewhat to the married vocation.

St Joseph, be my patron in this! The Holy Family is the exemplar of simplicity in family life.

St Josemaria Escriva wrote of Joseph and his relationship to Our Lord and His Mother:

Joseph was, we have said, a craftsman from Galilee, just one man among many. What had life to offer to someone from a forgotten village like Nazareth? Nothing but work: work every day, with the same constant effort. And at the end of the day, a poor little house in which to rest and regain energy for the next day.

But the name Joseph, in Hebrew, means "God will add." God adds unsuspected dimensions to the holy lives of those who do his will. He adds the one important dimension which gives meaning to everything, the divine dimension. To the humble and holy life of Joseph he added — if I may put it this way — the lives of the Virgin Mary and of Jesus, our Lord. God does not allow himself to be outdone in generosity. Joseph could make his own the words of Mary, his wife: "He has looked graciously upon the lowliness of his handmaid... because he who is mighty, he whose name is holy, has wrought for me his wonders."

(St Benedict's Rule -- Bread and Pittances)
(I've predated this post so it stands outside the chronological hierarchy -- it's written a year later than the timestamp)
Posted by Willa at 12:44 PM