Rule of Benedict: Simplicity and Silence 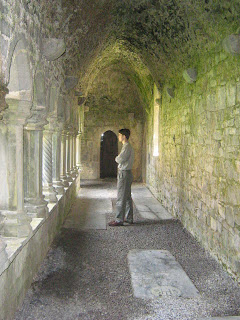 One essential aspect of simplicity as defined by Von Hildebrand, as it seems to me, is silence, though I don't know if he mentions it or not. I was thinking at Mass today about Jesus's silence as Herod interrogated Him hoping to witness a "sign", and the silence of Mary and Joseph. Even the silence of the Gospels on the life of the Holy Family seems not a silence that shows insignificance, but more like a privacy or intimacy wherein there is great mystery and depth. As a former Protestant, I have read things that seem to imply that Mary isn't discussed much in the Gospels because she is not that important -- but it is almost the opposite. I think she would be the first to say, as she did in her Magnificat, that she is only important through God, but saying that is saying much. Once that is said, it is not necessary to say much more.. It seems to me that the Bible tends to protect the privacy of those it portrays, at least insofar as they are in God's grace. Silence does not mean insignificance, in Scripture. There is a wealth of significance in what is NOT said in the story of Abraham and Isaac, for instance. It is one of the tersest and most packed passages of narrative in all literature. And the silence of the carpenter's home in Nazareth is also packed with meaning.

St Benedict in his Rule talks about Silence.

Let us act in conformity with that saying of the Prophet: "I said I will guard my ways lest I sin with my tongue; I have put a bridle on my mouth; I was dumb and was humbled and kept silence from good things." Here the prophet shows that if we ought at times for the sake of silence to refrain even from good words, much more ought we to abstain from evil words on account of the punishment due to sin.

At Mass it occurred to me that "silence" does not merely mean "lack of speech". It implies a fullness. I found this article discussing the Rule:

Silence is not a mere absence of words or thoughts; it is a positive and substantive reality. Esther De Waal alerts us to the important distinction Benedict makes between taciturnitas and silentium (taciturnity and silence). Taciturnitas “simply means not speaking,” while “silentium has “the wider understanding being still and silent.”....
We can further clarify the distinction between taciturnitas and silentium by taking note of how silence is compatible with words while taciturnity, of itself, has little or nothing to do with silence. In fact, silence requires a relationship with words in order to be itself.

Pope Benedict XVI has spoken more than once on St Joseph's silence, as in this Advent 2005 meditation:

St. Joseph's silence was not an expression of interior emptiness, but on the contrary, of the fullness of faith that he carried in his heart, and that guided his every thought and deed.

"A silence through which Joseph, together with Mary, safeguarded the Word of God ... and continually compared it with the events of Jesus' life; a silence interwoven with constant prayer ... and with unreserved trust in Divine providence. It is no exaggeration to say that from His 'father' Joseph, Jesus learnt - at a human level - the vigorous interior life that is a premise of true justice, the 'superior justice' that one day He would teach His disciples."

The same aura of silence that envelops everything else about Joseph also shrouds his work as a carpenter in the house of Nazareth. It is, however, a silence that reveals in a special way the inner portrait of the man. The Gospels speak exclusively of what Joseph "did." Still, they allow us to discover in his "actions" - shrouded in silence as they are - an aura of deep contemplation. Joseph was in daily contact with the mystery "hidden from ages past," and which "dwelt" under his roof.

St Benedict, in his Rule, commands that the brothers should rarely be given permission to speak; that if something needs to be asked, it should be done with humility and reverence. He is especially harsh on "buffoonery" and "idle words".

In a family the circumstances are somewhat different. Children need to speak in order to develop. But certainly, appropriate and timely speech is a good habit to train. I think that the rule about asking or questioning with "humility and reverence" is a good habit to develop. At least, it seems important to avoid arrogance and disrespect when a child is communicating with a parent (or indeed, vice versa).

Children love merriment and fun and this doesn't seem to be the same thing as buffoonery and idle words. However, an inordinate love for silliness and frivolous things can lead set up some buffoonish, idle habits in a teenager or young adult. Chesterton said that jokes can be serious things and seriousness can be nonsensical, so it's not so much the occasional lightness and high spirits in a home as it is a constant habit of avoiding anything with real weight. For some reason I think of Montessori's idea of "normalization" in regard to this. She thought that most Western children are not "normalized" and that was why they were so often giddy and foolish and irresponsible. Work, she thought, gave them a sort of "gravitas" that wasn't inappropriate solemnity or soberness, but a sort of receptiveness and ability to interact with things outside of themselves. By "work" she didn't mean manual labor, but the exercises with materials that were a large part of her method.

Children often seem to get silly and foolish when not much is expected of them or they are not taken seriously -- when they are given toys (action figures up to cell phones and laptops) and basically told without words that they don't have a serious part to play in the world.

Part of St Joseph's "silence", as Pope John Paul II pointed out, was a speaking of actions -- of work and thought. Many pictures show Joseph in the workshop with Jesus, with both of them silent and thoughtful but focused on the work they are doing and implicitly, on their relationship.

Giddiness and foolish words, in addition to setting up a habit of looking out for trivial and frivolous things, also seem to have a way of shutting off receptivity. My youngest is very sociable and a great talker. There are times when his talking is the kind that seems to be trying to take in the world as it is, the "good" kind of talking, since talking and language are of primary importance to humans as a means of refining and conveying thought. He asks questions or makes thoughtful, acute comments about something he has observed or read. There are other times when his talking seems to shut out everything but himself -- he's sort of forcing his personality on everything around him. I notice this most at Mass or when he's getting too wild at home or somewhere else. Aidan's transplant coordinator used to talk about a child being "plugged in" meaning he was actively dealing with the environment, what Von Hildebrand might call perceiving the "logos" of the situation. When a child is over-the-top, either in wild hilarity or wild sorrow, he usually is creating a wall of static around him or "unplugging" himself from reality.

Related to this -- a little article I read in the church bulletin today talked about shutting off the noise that comes from outside ourselves-- something that's very hard to do in our society, since noise is everywhere. At Real Learning we were discussing Simplicity Parenting -- chapter 6 was about "filtering out the adult world" and discussed the problems of chronic, ubiquitous media exposure in relation to children. But it isn't just hearing horror stories on the news -- it's ALL the information, which adds up to Too Much even if it's not in itself troubling. Some of this applies to adults too. There is such a thing as auditory clutter. Like visual clutter, it is distracting, energy zapping, and makes things seem more complex than they should be. If you are physically quiet yourself but still voluntarily choosing to receive "noise" from the environment, then it isn't really silence. The article I read recommended having quiet times and working to limit voluntary exposure to noise (obviously you can't do much if your workplace has a radio or TV on all the time). Later in the Rule, Benedict talks more about the times for silence during the day. It seems like it makes sense to have quiet times in family life as well.

I am not the best person to preach on excessive environmental noise because like a couple of my children I get subliminally disoriented by a noisy environment, so I instinctively avoid TV, radio, stereos and crowds whenever I can, and being exposed to them is penitential. But I am not immune to the temptation to a noisy environment in a different way. Too much reading, on the internet, in magazines, even in books, can have exactly the same effect. Sometimes when I sit down to pray my head is filled either with my own words -- like a running mental commentary -- or with phrases and sentences from other sources. Then I know I've been writing or reading too much, even if I have been fairly quiet in a physically quiet environment.

Some quotes on silence from Holy Fathers (Orthodox) over here. I particularly like this one:

If you pile up on one side of the scales all the works demanded by ascetic life, and on the other side-silence, you will find that the latter outweighs the former. Many good counsels have been given us, but if a man embraces silence, to follow them will become superfluous.