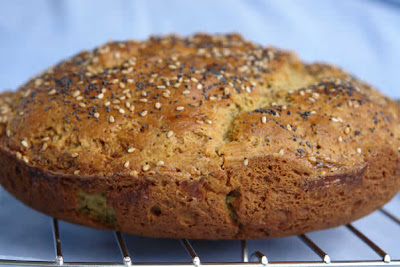 I was intrigued by what Amy said in my combox the other day about changing the menu according to the liturgical year. I read around on the internet a little this weekend-- from this site I found that though the Cistercians ate very austerely they would flex the normal menu according to the ligurgical year with things called "pittances", which would be things like eggs, fish, etc.... things they didn't usually get. They were given on feast days and might add up to once a week or more since our Church calendar is pretty rich.

The Cistercians objected to the laxity and gluttony of other orders and ruled that, in accordance with chapter 61 of the Rule of St Benedict, the monks should eat once a day. In summer, however, a light supper was served to sustain the monks during the longer days and the extra time spent working. As stipulated in chapter 59 of the Rule of St Benedict only two dishes were to be served at meals and meat forbidden to all save the sick. The Cistercians’ diet largely consisted of coarse bread (a finer quality bread was given to the ill, the bloodlet and guests), vegetables, herbs and beans, but on special occasions, such as feast days or anniversaries, they might be served fish, eggs and other delicacies, known as pittances. Treats of this kind might be served once a week or more, although the General Chapter stipulated that pittances should not be served on three consecutive days. The monks drank ale or wine, and whilst the amount was restricted additional drinks were served during the long hot summer days, to prevent dehydration. Salt and home-grown spices were used to flavour and season foods; luxury condiments such as pepper and cumin were discouraged.

In the Rule of Benedict, in the section on Food and Drink, it talks about one daily meal (though another was sometimes added when there was extra work). There were two cooked dishes at every meal (the choice was provided for "weakness" in case one of the community could for some reason not eat from one) and a third could be allowed if there was fruit and fresh vegetables. There was an allotment of one pound of coarse bread per person. Sick people could have finer bread and sometimes, animal flesh, but healthy members of the community did not eat animal meat.

I can see why a monastery would be strict about food. When the monasteries relaxed too much about what they ate and drank it was usually the start of a general loosening that was very bad for their goals. Such things, I would imagine, would be if anything more destructive and dangerous in a religious community than in the ordinary world. I suppose it would be very tempting for religious, having given up ordinary consolations AND sacrifices that are integral to a lively Catholic married life, to become somewhat comfortable and set in their ways as something like a group of middle-class bachelors, thus exchanging the better for the worse. Thus the importance of meticulous obedience to the Abbott AND that of self-denial and austerity, since ordinary people usually take on the customs of their community. Where these things were lacking, according to the historical record, the level of virtue tended to slip a bit too. I'm talking about things outside of my own expertise but given that St Benedict has such specific details in his Rule about food, I think he must have considered the specifics quite important to monastic life.

But if the work has been rather heavy, it shall be in the discretion and power of the Abbot to make some addition, if he thinks it expedient, provided that excess be avoided above all things, that no monk be ever guilty of surfeiting; for nothing is more unworthy of any Christian than gluttony, as our Lord says: "Take heed to yourselves, lest perhaps your hearts be overcharged with self-indulgence and drunkenness."

The Rule mentions a daily pound of bread. During seasons when there were two meals a day because of increased manual labor, a third of the pound was set aside for the second meal.

Now I looked up CostCo's Kirkland Multi-grain bread since I have some here and it's the closest thing I have to old-fashioned coarse bread. It has 53 grams to a slice. There are 454 grams in a pound. So a pound of bread is about 8.5 slices. Each slice is about 140 calories (which is higher than normal bread) but if you ate 8 slices you would get all your RDA of calcium and iron, 48 grams of protein (almost the whole RDA of a grown man, which is about 56; an average woman who is not pregnant or lactating needs about 45), more carbs than the RDA, and only about 12 grams of fat (which is not very much -- most sites seem to recommend 50-60 g as a good low-fat norm). And it would add up to 1200 calories. And cost something like a dollar or two a day per person, since there are about 24 slices in two loaves of Kirkland's Multi-Grain and my husband who does the shopping says it costs about 3.69 to get the double pack (I don't know if this varies across the country).

Throw in the fluids for hydration plus the two cooked dishes for extra calories (most grown active men need 2200 to 2600 calories a day, while women ordinarily need 1700 to 2100 -- here's a place where you can input your own numbers and get a daily calorie estimate) and seasonal fruits/vegetables to get RDA for vitamins and so on. It may be more austere than what most Americans eat (especially the 1-2 meals a day -- that would be hard for me) but it's certainly health-sustaining. And quite low-fat if you don't add a lot of butter etc to the bread.

Do you care about all this? ;-). I like numbers and I found this very interesting. I didn't realize wholesome bread could give you so much basic nutrition. This is storebought bread of course and probably has lost some nutrition during storing and so forth. Also, it tastes really good to me so I have a feeling that old-fashioned coarse bread wasn't so appealing because all the books I read (recently Heidi) talk about how much preferable white bread is, and I can hardly stand to eat white bread.

I like the idea of tying "pittances" or luxury foods in to the liturgical year, too. We do something like that during Lent but it would be interesting to try to tailor menus around celebration and fast cycles, year round. And of course, since the liturgical year resonates with the agricultural year, seasonal foods would play into this too. Hmm, just fun to think about -- no real plans right now! But if you do something like that I'd love to hear about how you do it!

Also, I like the word "pittance" used to describe a luxury food (you see how luxury is a relative term -- it takes some mental effort for me to think of eggs and fish as an uncommon extra). Pittance is defined as a "meager allowance", which is a negative description, but "allowance" implies something bequeathed beyond what is ordinary and needful and "meager" certainly evokes something that is not a huge gluttonous feast but is minimal. That's probably a good way to think of the luxury foods in my life. Whenever I'm in the kitchen these days I keep finding Pete Townsend's "Just a Little is Enough" running through my head! So I guess I do have at least one "mantra"! My mantras often seem to be songs or lines from books!

And that is the end of a very rambling number-crunching post..... mmm, crunching....
Posted by Willa at 8:41 AM