The Simplicity of the Father 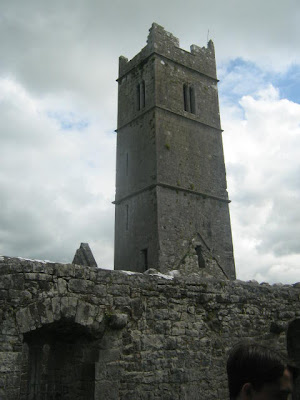 The Abbot, St Benedict writes, should be like a father. And what is a father like? It's a good time to reflect on this because March 19 was the Solemnity of St Joseph, the archetypical father, earthly Guardian of Jesus. St Joseph's characteristics include justice, gentleness, diligence in teaching his foster-Child, and immediate response to God's calling.

"Like his wife Mary, St. Joseph showed himself to be the true heir of the faith of Abraham: faith in God Who guides the events of history according to His mysterious salvific plan."

St. Joseph's greatness "is even more evident because his mission took place in the humility and obscurity of his house in Nazareth,....Indeed God Himself, in the Person of His Son incarnate, chose this way of life and this path in His earthly existence."

St. Joseph's example presents all the faithful with "a powerful invitation to perform the role that Providence has assigned us with faithfulness, simplicity and modesty.”

Pope Benedict prayed that mothers and fathers “may always know how to appreciate the beauty of a simple and hard-working life, carefully cultivating their conjugal relationship and enthusiastically accomplishing the great, and by no means easy, mission of education."

Here's another site -- Catholic Treasury -- which discusses the simplicity of St Joseph as Father and Spouse.

St. Joseph's virtues are those especially of the hidden life, in a degree proportioned to that of his sanctifying grace: virginity, humility, poverty, patience, prudence, fidelity, simplicity, faith enlightened by the gifts of the Holy Ghost, confidence in God and perfect charity. He preserved what had been confided to him with a fidelity proportioned to its inestimable value.

Since I'm trying to work this in as an application of von Hildebrand's discussion of simplicity, I am invoking St Joseph as an eminent earthly model of the traits St Benedict would want to see in an Abbot and that earthly fathers -- indeed, parents -- should emulate. The whole month of March is dedicated to St Joseph so even though I missed the solemnity, I'm not too late.

So, here are some of the characteristics of the Abbot, according to St Benedict (which I'm carrying over to the role of pater familias, but in a way, both parents in the home since they are both cooperating in the task of raising children).

He is always mindful that in some respects he holds the place of Christ.

So he will certainly never command or prescribe in any way contrary to the laws of God.

His commands and teaching should be "instilled like a leaven of divine justice" into the minds of his children.

He is responsible for his children -- so if he has failed in his duty, and his children turn out badly, God will hold him accountable. On the other hand, if he does all he should do, "if he gave all a shepherd's care to his restless and unruly flock, and took all pains to correct their corrupt manners" and one or more of his children is lost in spite of that, he will be blameless.

There are two ways to govern depending on the aptitude of those in his charge:

he should show them all that is good and holy by his deeds more than by his words;

explain the commandments of God to intelligent disciples by words,

So words and works are both important. Works are more important though, as is always the case with evangelization. “Preach the Gospel at all times and when necessary use words.” --Francis of Assisi. Children are quicker to understand how parents act than what they profess, and by the time they are old enough to internalize the words, they are usually old enough to tell if the words don't match the deeds.

He should make it clear to them that they owe obedience insofar as he is saying nothing contradictory to what God says. In other words, he should be transparent -- make it clear that his authority is not raw power but is a reflection of a higher authority. His responsibility to be a good reflection is a high one -- whenever there is higher authority there is higher responsibility, so the children should know that he is not an arbitrary despot but a sort of steward or vice-regent of the King.

A father should show no favoritism or prefer one child over another. He may have a particular kind of love for those who are "more exemplary in good works and obedience." This love would be based on the love for virtue. But he should not prefer one based on anything else like natural ability, looks, personality compatibility, etc. In this he follows God, who is no respecter of persons:

We are distinguished with Him in this respect alone, if we are found to excel others in good works and in humility. Therefore, let him (the Abbot) have equal charity for all, and impose a uniform discipline for all according to merit.

And all fathers are a bit like the father of the Prodigal Son, or like David with Absalom. They should still love and watch for the rebellious children, rejoicing for the one sheep that is restored. (St Benedict does not emphasize this so much because he is talking about a monastery where an unregenerate monk is like a wolf in the fold, and can cause much destruction). There is more on the details of how to treat rebellion later on in the Rule.

How should the parents discipline, or as St Benedict says, teach? (etymologically the two are close to synonyms). He quotes St Paul for the core procedure:

"Reprove, entreat, rebuke" (2 Tm 4:2)that is, mingling gentleness with severity, as the occasion may call for, let him show the severity of the master and the loving affection of a father.

This is very similar to God the Father in the Old Testament. What you notice in reading through salvation history is not just his rebukes and justly severe consequences but also His willingness to implore, to forgive again and again, to make covenants even when He knows they will be broken by His people, to show "loving affection".

There are different recourses depending on the attitude of the child.
St Benedict goes on to say of the Abbot, the father, that he should adapt his approach to each according to their bent and level of understanding:

Let him understand what a difficult and arduous task he assumeth in governing souls and accommodating himself to a variety of characters.

Let him so adjust and adapt himself to everyone -- to one gentleness of speech, to another by reproofs, and to still another by entreaties, to each one according to his bent and understanding -- that he not only suffer no loss in his flock, but may rejoice in the increase of a worthy fold.

In the home, this seems equivalent to a general understanding of developmental stages and temperament. Most fathers don't spend a lot of time reading about childhood development and temperament, which is probably good because a lot that is written is partly nonsense, but they usually benefit from having a rough-and-ready sense of where the child is at the moment. This comes more from love and sympathetic observation than from a thorough book knowledge of childhood psychology. Moms are helpful here, too. I think moms often naturally play an intercessory and intermediary role, and fathers often take cues from a mother's relationship with the children, which makes a mom's responsibility a grave one, too. I know I often "interpret" a small child's language or action to my husband and sometimes share the context out of which an older child is acting. On the other hand, it's useful that my husband is not so constantly and directly involved in their lives because he can often see more clearly how their behavior looks "from the outside" so to speak. In this way we can ideally complement each other and it's surprising how often it does work well when you consider that we are normal human beings and no saints.

I'm quoting the last part of the chapter in full because it sums up the responsibility of parents and what their focus should be. By putting God in first place and taking seriously their responsibility for their childrens' souls above all else, they learn to hold their position with a high sense of respect and responsibility and in the process of caring for their children and their needs, they also help their own souls. Earthly things have importance -- certainly parents should take care of their childrens' bodies and minds and educate them towards taking their place in the world -- but this is not of primary importance. And raising children is something that matures the parents. Parents usually aren't entirely mature when they have their first child. They are refined in the kiln, so to speak.

Above all things, that the Abbot may not neglect or undervalue the welfare of the souls entrusted to him, let him not have too great a concern about fleeting, earthly, perishable things; but let him always consider that he hath undertaken the government of souls, of which he must give an account. And that he may not perhaps complain of the want of earthly means, let him remember what is written: "Seek ye first the kingdom of God and His justice, and all these things shall be added unto you" (Mt 6:33). And again: "There is no want to them that fear Him" (Ps 33[34]:10). .... And thus, whilst he is in constant fear of the Shepherd's future examination about the sheep entrusted to him, and is watchful of his account for others, he is made solicitous also on his own account; and whilst by his admonitions he had administered correction to others, he is freed from his own failings.