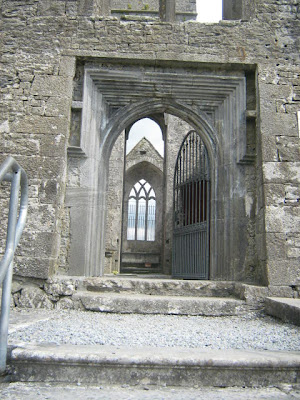 Dietrich von Hildebrand talks often of God as "unum necessarium" in regard to true simplicity. This of course is a reference to the story of Martha and Mary in Luke 10.

As they continued their journey he entered a village where a woman whose name was Martha welcomed him.

She had a sister named Mary (who) sat beside the Lord at his feet listening to him speak.

Martha, burdened with much serving, came to him and said, "Lord, do you not care that my sister has left me by myself to do the serving? Tell her to help me."

The Lord said to her in reply, "Martha, Martha, you are anxious and worried about many things.

There is need of only one thing. Mary has chosen the better part and it will not be taken from her.

There is so much sympathy in the way Our Lord treats Martha. She is trying hard but she is letting herself get scattered and off track by her duties. He is reminding her that all her work is towards one thing and Mary has chosen that one thing simply, without excess or deficiency.

Dietrich von Hildebrand writes of the one who is devoted to God:

Above all, he never quits his basic attitude: an attitude essentially aspiring towards God, receptive, and steeped in charity. Though he must answer the infinite variety of specific situations with a vast reaction of outward reactions and emotional tones, he yet never abandons that one central attitude which is defined and shaped by Christ. .... manifestly, simplicity corresponds with continuity. The truly simple man always preserves his basic identity: though his register of tones be designed to meet a vast diversity in types of situations, the register itself always remains the same and is always governed by one unchanging central attitude.

In this way you can see that "simplicity" is not a flat affect, like being a Stepford wife, but an accord of affect -- in other words, the difference between randomly striking keys on a piano, and playing a piece that may have a variety of notes and counterpoints and harmonies, but is all designed towards a unified, beautiful effect.

Martha was playing the right music, you could say, but not in the right way. Later on she makes a beautiful profession of the unum necessarium, though, in John 11.

Martha said to Jesus, "Lord, if you had been here, my brother would not have died.
(But) even now I know that whatever you ask of God, God will give you."

Pope Benedict XVI in an address to the bishops of the USA said of the lack of religious vocations:

Strange to say, I often think that prayer – the unum necessarium – is the one aspect of vocations work which we tend to forget or to undervalue!

... Prayer itself, born in Catholic families, nurtured by programs of Christian formation, strengthened by the grace of the sacraments, is the first means by which we come to know the Lord’s will for our lives. To the extent that we teach young people to pray, and to pray well, we will be cooperating with God’s call. Programs, plans and projects have their place; but the discernment of a vocation is above all the fruit of an intimate dialogue between the Lord and his disciples. Young people, if they know how to pray, can be trusted to know what to do with God’s call.

I think there is an undervaluing of contemplation in our American culture which after all was formed on the virtues of hard work and enterprise. It's not that those things are bad, but that they are insufficient in themselves. Industry for the sake of industry becomes acedia, sloth, a way of avoiding reality. I think our forefathers worked for something greater than the work but if we forget this, the work itself becomes an end, or just a way to pursue hedonism of one kind of another.

Wall-E is a resonant movie example of this. The little robot has been built to, in a sense, repair for the sins of over-production and sterile consumption and by the cheerfulness and love in his penitential endeavor he transcends its futility. It becomes almost a prayer in work.
Posted by Willa at 9:11 AM