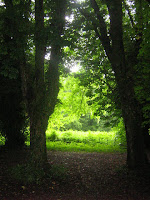 Jesus said that He is "the Way, the Truth, and the Life". Von Hildebrand writes (pages 86-90) that Jesus is the principle of simplicity, but simplicity here is nothing like sterility, facility or dumbing-down. Rather, it seems to be focus, which subordinates all things to what is most important.... if you recall Matthew 6:22. which Charlotte Mason quoted in one of her books, Jesus says that the "eye is the lamp of the body".

Or to put it another way, it is analogous to what Von Hildebrand said about life being the unifying principle, even with organic material life. Simplicity isn't primitivity -- it's order. (seems to apply somewhat to homeschooling but I'll have to think about that later)

Some things that Dietrich von Hildebrand say contribute to simplicity:

He calls it "plain honesty". This implies dealing truly with oneself and those who are around you. I remember in reading Screwtape Letters recently that CS Lewis wrote that the devil wants people to lie to themselves or to others, even with good intentions. He uses the context of humility -- there is a false humility that says "I am stupid" even when one knows one is reasonably intelligent, or "I am ugly" even when one is fairly attractive. This is complexity, and it is lack of sincerity, even if well-intentioned. CS Lewis thought it had damaging effects that delighted the devil, because it prevents the "light of our body", the eye, from seeing clearly.

He is entirely concentrated on the unum necessarium. He does not leer around him; still less is he watching himself; his eyes are directed straight at the logos of truth, which he follows without restraint.

"Above all, he never quits his basic attitude: an attitude essentially aspiring towards God, receptive, and steeped in charity. Though he must answer the infinite variety of specific situations with a vast compass of outward reactions and emotional tones, he never abandons that one central attitude which is defined and shaped by Christ. ... Manifestly, simplicity corresponds with continuity....

It is all too easy, von Hildebrand writes, to "slip out of our festive garment" of prayer -- to compartmentalize our prayers and devotions and live differently at one time than we do at another. In fact, I think that living continuously is THE hardest thing for me at least. Yesterday I had a bunch of things that really needed to be done. But in doing them, even though they were things I knew God didn't want me to shirk or put off, I found myself being scattered among the variety of tasks. How to avoid this kind of thing? In the next part of the book, Von Hildebrand gives some suggestions.

Finally, he says that simplicity is empowering.

This is even true on natural terms. Someone focused on an earthly goal and devoted to it -- whether a great love or a great ambition -- is exponentially more likely to reach the goal than someone who dilutes their efforts and takes it easy.

How much more true when the goal or relationship transcends time and space. The power then is not just personal, it is informed by, infused by something way beyond personal ability.

Since this is still March, I will point out that St Joseph is an exemplar of plain honesty and continuity and the resultant power to act in a distinguished way. There is very little written about him in the New Testament. But everything written shows him to be eminently consistent and transparently conscientious and honest. He never acts like anything else than what he is, a carpenter and family man, but at the same time he fills those roles entirely and eminently. There's never any action or word (there's actually no words at all of his in the Scripture) that doesn't entirely belong to what is said of him, that he was a "just man". And the circumstances that met him were not "simple" in the sense of being flat and pedestrian; his life was very unusual in many ways. But it was not unusual in the sense that he forced it into unusual patterns, like so many do trying to express their individuality. Nor was he "simple" in the sense of being flat and pedestrian. He was simple in response, in action, to some quite unique challenges and requirements.
Posted by Willa at 8:42 AM