Every systematic science, the humblest and the noblest alike, seems to admit of two distinct kinds of proficiency; one of which may be properly called scientific knowledge of the subject, while the other is a kind of educational acquaintance with it. For an educated man should be able to form a fair off-hand judgement as to the goodness or badness of the method used by a professor in his exposition. To be educated is in fact to be able to do this; and even the man of universal education we deem to be such in virtue of his having this ability. It will, however, of course, be understood that we only ascribe universal education to one who in his own individual person is thus critical in all or nearly all branches of knowledge, and not to one who has a like ability merely in some special subject. For it is possible for a man to have this competence in some one branch of knowledge without having it in all.  Aristotle, On Parts of Animals 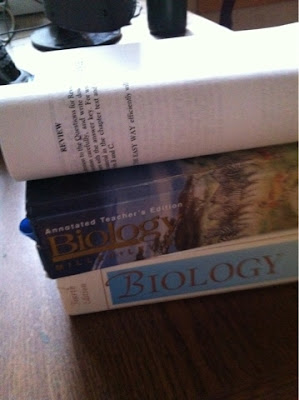 As we kick off Kieron's sophomore year,  Kieron and I sit to watch the first installment of Biology videocasts at Bozeman Biology.    The teacher covers several themes that are important in biology.    It's interesting but not particularly exciting, not the sort of thing that stays in your mind unless you make an effort to study and remember.  (But I really like the way the teacher presents the material; I wish my high school biology teacher had been so organized and clear -- homeschooling gives me another chance to appreciate subjects I didn't get much out of the first time around!)

Later on I flip through the AP Biology book we have at home.  Again, it's substantial but not particularly gripping, at least not to me.    It would take hard work to assimilate all that is in the book, and unless I kept reviewing it, most of it would slide out of my head again before too long.   Witness the fact that I took high school biology 30 years ago (in the school I went to, you had Biology, Chemistry, and Physics all running concurrently through the secondary years, so I had 3 years of Biology).

What did I get out of it?  Well, I do remember some of the material.  When I read a biology book, a textbook or a layman's topic of interest book, it's not all completely unfamiliar to me.  I have a few contextual hooks to hang the new information on.

Of course, some of it's outdated.  What I learned 30 plus years ago is not universally what they teach now.

I also presume I learned a bit about how to study biology; how to study in general, and how to stretch my mind towards something I wasn't naturally interested in.

(Probably not very much that way though; biology was my least favorite science subject by a long shot, and I admit I did everything I could to pass with the minimum of effort)

It makes me think.   A high school student is expected to put a lot of work into learning this material.   For many students that will be their last exposure to formal study of biology.    Some of it will become somewhat outdated in the details (for example, the teacher explained that in his day there were considered to be two "empires" of life, prokaryota and eukaryota, and now there are considered to be three "domains" (bacteria, archaea, and eukarya), better representing vast differences at the molecular level, from what I understand.

So what's the payback, the reward for all the work to assimilate and stay motivated?

To find out what some have said, I googled "Why Study Biology?" (and then, I will be prepared if Kieron asks the fatal question!).

The study of biology has an immediate relevance to our daily lives. It is important for everyone to develop an informed sense of how we may individually and collectively continue to fit into the complex ecology of our planet without rendering horrendous destruction.

I wouldn't personally use those exact words but I can see where some general knowledge would be helpful in our civic duty in keeping an eye on scientific advances.   Deep ignorance is of no help in thinking ethically and making good civic decisions.

The article also points out that societies as a whole need to keep up with biological advances, because the field is moving so fast. So at least some, not all people in a given society need to stay up in the front of the field.   I have no arguments to find with that, though it only applies to those who choose to go on in the field and make it their lifework.

Another site talks about the many careers related to biology.  And of course, the field continues to expand.    A biology background can help you in the fields of research, health care, education, computer technology, and even communications (as a society, we would rather not have profoundly ignorant journalists imparting their erroneous understanding of new scientific advances to us, if we had a choice).

So in that respect, a biology background helps prepare you for your own possible future, and might also by that means benefit society as a whole.  This seems true, too.


This site presumes rather charmingly that one has already become fascinated by biology and would like to investigate further.

Haven’t we all had the experience? Maybe it was in your backyard as a kid or hiking outdoors. Maybe it was while dissecting in biology lab or watching the Discovery channel on TV. At some point we discovered that we are fascinated by living systems. In the Department of Biology, we share your fascination with the natural world. We believe that the study of biology will prepare you for a variety of careers where you can make a difference in the world. Our mission is to enable you to reach your potential while celebrating the study of life.

It also covers the other two major bases -- your own career, and the advance of the society of a whole.  But its focus is on developing your human potential.   And not only that, but it brings out the objective delightfulness of the biological sphere of knowledge, a delightfulness that I know from nature study and personal reading but not so much from my own high school study of the subject.

There are plenty more sites that I could quote, but after some quick glancing I think they are mostly variations of the same themes already showcased.

From looking through here, and looking at the Aristotle quote above, I think that biology (and by extension any kind of science) is worthwhile for:
Where you might stop in that ladder would depend on the individual.

Probably most college prep highschoolers would want to get up through 2, and it would be better if everyone was at least partway into the second step.    But general biology in the form of a background in nature study and some understanding of the human body and one's own surroundings would be good for everyone.

I notice that interest in the subject being studied is not only good in itself, but also can help or in fact be almost essential for reaching the higher rungs of the ladder.    There are two types of interest:

Probably most people pursuing a subject seriously have a mixture of the two.  In any subject seriously pursued, the drudgery factor sometimes seems to outweigh the interest, even if interest is strong.  But if one has bigger motivations that involve the subject, then you have a motivation that can carry you through the dreary parts.

If a student doesn't have much intrinsic motivation to study a subject there seems to be a variety of ways that this can be coped with:


Again, I suppose most things are a mixture.  I've gotten interested in things that I didn't naturally feel attracted to because I was fond of the teacher.  Since I'm bookish, a lot of times that meant that I liked the author of the book so his or her subject became attractive to me.    I never really developed those vigorous study habits that my father excelled in, so I usually have to rely on intrinsic interest, trust, or affection to carry me into a subject.   My father had all three -- interest, habits and emotional attachment, plus an excellent educational background -- and so he was a true scholar.

Sean, last year, wasn't at all naturally interested in Algebra II, and he hated the textbook, but he had a decent work ethic from his years of football and his general approach to life which got him through, though I really really doubt if a mathematics major is in his future. It was something like the Mucius Scaevola approach... probably showing that if you just have to endure, #2 can get you to the other side solo, but if you want to really KNOW (which incorporates true appreciation) then you are probably going to need at least a bit of #1 and #3.  Good news is, you can usually deliberately choose to foster those, especially #1 (it is a trait of intellectual maturity); and as Charlotte Mason pointed out, the broader the child's base of interests and affinities is, the more the adult version of the child will be able to foster the seeds of interest in and attention to anything worthwhile.