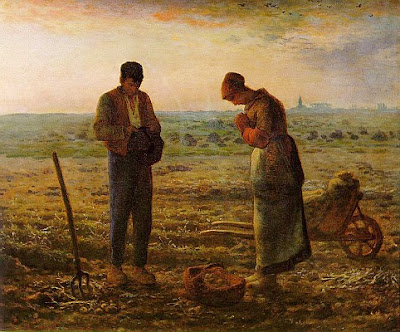 
Last year my word was "interiority" and that bore much fruit.  This year after I prayed and thought about it for a long time, I decided on "cultivation" for my word for 2011.    The idea came from Aquinas, On Prayer and the Contemplative Life, translated by Hugh Pope.

But we are said to reverence those men whom we honour or remember, or to whose presence we resort. So, too, even things which are subject to us are said to be "cultivated" by us (coli); thus husbandmen (agricolæ) are so called because they "cultivate" the fields; the inhabitants of a place, too (incolæ), are so called because they "cultivate" the spots where they dwell. But since special honour is due to God as the First Principle of all, a special kind of "cultus" or "reverence" is His due, and this the Greeks call eusebia or theosebia, as S. Augustine says.

I mentioned when I reviewed Splendor in the Ordinary that I have a disconnect between what goes on in my head and what I undertake with my hands and in my life.   The word Cultivation reminds me of how things that are under our stewardship -- house, garden, children, and so on -- are to be tended, but in a particular way.

Therefore, neither he that planteth is any thing, nor he that watereth; but God that giveth the increase.

Nevertheless, though God gives the increase, it is still our responsibility to plant, water, till and so on.

So that word, I hope, will remind me of the patience and care and honest work that goes into tending the garden of one's life!

It also has a connotation of Fine Arts and the "cultivation" of the intellect and aesthetic sense and I don't want to forget that part either.
Posted by Willa at 12:12 AM