Aidan is progressing well in lots of ways, but math is not one of them.   He learned his numbers quite early and loves to "do math" but we have been stuck on addition for a long time.... years in fact.   And you can't really progress to subtraction, multiplication or division if you don't understand addition, so it's been sort of frustrating.

I think we had a breakthrough yesterday evening, though.   He brought me the abacus and suggested, "Let's do math!" 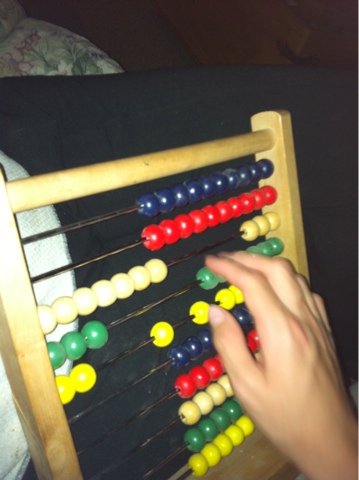 The thing is that he can count his way to addition answers on any manipulative, but doesn't seem to be able to hold a mental image in his head to add without manipulatives.   So he can do these problems by counting, but that doesn't seem to get us much further.   And counting is not the best way to add larger numbers, if you have noticed.  You are liable to make mistakes.  It seems to me that you really need to be able to group things in your head, at least.

Then he said, "Let's do multiplication!"

I was just starting to say, "I think that will only confuse things," when suddenly I realized what a school trap I had fallen in to.   Multiplication is only another way of adding, and there was absolutely no reason why he couldn't multiply on an abacus just as well as add.   In fact, the Miquon Math series which I used a bit with my older kids has you learn smaller multiplication facts along with the addition and subtractions.  When you approach it with manipulatives, it's perfectly natural to do this.

So we did 2 3's, 3 3's, 4 3's, etc.  He was still counting to get the answer, but the rows of beads were right there in front of him to show him what he was doing.  He started laughing with excitement.   It was going a lot better than the addition, and he was really doing "times" which seems to him much more grownup than adding.

Then I thought, "We could get across "greater and less" and "equal to" this way."  That was something that he had trouble with on developmental tests.  So I started setting aside certain amounts of beads and asking him to set aside the same amount, or more, or less.  He got that just fine.

Then I realized I could teach him to count by 2's.   And with a little practice, he did that just fine, too.

There is nothing so astonishing in all this.  It's just that I realized that there are all sorts of math things I can do with him this way, where he is able to use his learning style and (to be honest) I can get excited instead of somewhat depressed and anxious as we go over the Same Thing for the thousandth time.

Suddenly we both feel more free to really have fun with the numbers.

When he is playing games like that --- they are games to him, but he is getting a data bank of concepts through his senses.

It's so nice not to feel stuck that I just had to share!

The other thing I want to take away is sort of an unschooly thing, though it isn't unique to unschooling.  But it seems that when I look at something from a creative or poetic point of view rather than just a "how it should be done" point of view, I can see the whole situation more clearly.

I think that is what problem-solving is essentially about, so I'm glad I am getting these chances.
Posted by Willa at 7:00 AM