Aidan is on a hunt for an ambulance coloring book but so far has not had much luck.  We make do with coloring pages of ambulances, fire trucks, GMC Yukons, school buses, and jeeps from the internet.

Coloring has become a strong interest of his.  It's interesting because he is 11 now and when his OT tried to get him to color when he was six or seven he was not interested.   A couple of years ago he went through an immersion playdough stage and now he is into coloring.   So even though he functions like a 7 year old for the most part I wonder if there is some developmental triggers going off that are in step with a younger developmental stage.   I think the tactile nature of these primary-stage projects are letting him "feel" his way into manipulating things.

Until age 5 he had a G-tube and a strong oral and tactile aversion, plus lived in pain and sensory deprivation in the hospital for his first few months of life, so I think it's quite possible he missed some of those early oral-tactile steps.  I am happy he is leading the way in showing me what he needs since I probably wouldn't think to myself, "Aha, maybe he needs to color a thousand cars and trucks printed from the internet!"  Since he's driving the show, I can respond to his requests, though he tends to get revved into project mode at about 9 pm when I'm getting into my pajamas so I can lie in bed and read!

The other day he wanted a picture of an ambulance in front of a hospital in a Pokemon episode he had seen.  My camera's batteries were dead, so he put them in the recharger and counted the minutes until they were ready to use.

Then he took the picture from the TV screen (with some help from me because it was scrolling by so fast he couldn't manipulate the video player and take the picture at the same time).

Then we uploaded and cropped it. 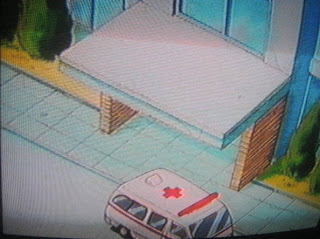 Then he said:  "I want it to be a coloring picture!"

I mentioned before that Picasa has a free online photo-editing tool, so you can make various special effects.  He remembered the black and white sketch feature which looks a bit like a coloring page.  Enough to go on anyway! 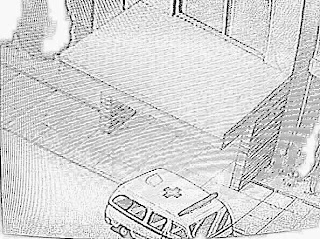 He also wanted me to make a coloring page of Chari's Yukon which impressed him very much when it was parked in our driveway this summer! 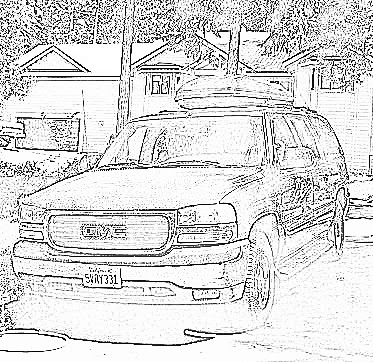 After I had printed out the outlines he colored them.  He has a vigorous way of coloring so that a finished picture looks like a very lively rainbow!   (someone took my batteries so I can't take a picture of one of his productions right now)

All in all he spent about 2-3 hours getting all this managed and accomplished.   I was proud of him because he has a tendency to get lost in space when he has a goal that involves several sub-steps.   Like if he wants to go outside in the snow, I find him wandering vaguely around the laundry room (where he has gone to get socks) or else trying to leave the house in shoes without socks and an unzipped jacket!

So it's good to see him able to visualize and plan out the next step in a multiple-step project!   And good to see him being able to express what he wants and ask for my help trusting that I can be persuaded to support him even if I'm almost ready to go to sleep!