Another Book about Good Eating 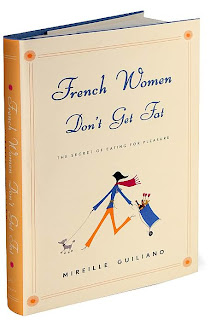 French Women Don't Get Fat -- I mentioned that I read this book and wanted to blog about it some more.   It's not really a diet book per se -- it's more about balance and using good common sense in eating.   And it is somewhat of a commentary on conventional American diet books, from a different cultural perspective.  It's easy to read, practical rather than profound, but speaks to a way of life more than most of those Diet Plans written by physician gurus.

So anyway, I liked the book (though I can't say I would subscribe wholesale to the recommendation of balancing your narcissism and your hedonism).

The book tells of the author's experience as a French girl who went to the United States as an exchange student and in exchanging French eating habits for American ones, gained 30 pounds which sat badly on her small frame.  (Her father, upon seeing her disembark on French soil, called her a "sack of potatoes"!).

Her mother addressed the situation of her weight gain by calling the family doctor in for a consultation.  Dr Meyer, who is called Dr Miracle in the book, was a sensible man who proposed a simple plan which she modifies and explains in the book.:

1.  Observation.  Keep an eating journal for 3 weeks -- what you eat and in what circumstances.  Once you've done this, look back on it and see what stands out.   In the author's case, her pitfalls were eating pastries and other sweet, floury things, and eating on the move (stopping at patisseries en route from home to university).

2.  Recalibrate.   This period takes 3 months, which gives you time to reset your system and build new habits.  The secret of French women, she says, is not to cause pain to yourself.    Some food issues are just habits which you have basically outgrown and just keep around because you haven't bothered to change.   Those types are fairly easy to get rid of.   Some food pleasures are really important to the individual -- these ones are perhaps better to work on differently.   Perhaps you can set up your day differently -- have tea instead of a beer when you come home at night.  Perhaps you can have one piece of bread instead of three.  Perhaps you can make sure not to have a lot of cash in your purse so you aren't tempted to stop at a favorite fast food place.  The advice is familiar -- the difference is probably more in the view that these things aren't bad, but are actually more enjoyable as well as healthier if they are enjoyed in a balanced way.

She doesn't recommend extreme workouts, or extreme anything.   She thinks Americans don't get enough routine exercise and that they should try to add more activity to their daily life and do athletic things if they are fun, not just because they are good for you.

3.  Learning to balance.  Now you have hopefully lost about half the weight you need to lose (she's addressing the book specifically to people who have to lose about 30 pounds).   You can slowly re-introduce some favorite foods.  She emphasizes that many people who over-eat are eating too much under-stimulating food, so she recommends experimenting with flavors and exotic, interesting or lively tastes and textures.    She recommends choosing a smaller portion of higher-quality foods and passing over the easy and over-accessible foods that most people tend to overeat.    During this time period you learn to maintain.   Your goal is to feel "bien dans la peau" which basically means you want to arrive at a weight where you feel good in your skin.  It doesn't necessarily have to be the statistical "ideal weight", just one that works for you and allows you to enjoy life and food.

4.  The rest of your life.   She says that people's circumstances change over time -- they have a child, hit menopause, change their job or move to a different place -- and these life changes may require re-adjustments but once you have the principles and strategies down it is easy to adapt them.

This is the plan and context of the book, but it contains lots of sensible, lively hints and contrasts typical American habits with the "French women" type secrets, which makes the book more interesting to me because it allows reflection from an outside perspective.

It also contains several recipes that are simple but involve good ingredients.  She encourages amateur kitchen preparations and exploration, which is the way I like best to cook -- putting lots of vegetables, spices and things together in simple ways and seeing how they taste.

So my impression of the book was favorable.  My only real issue was dislike for the idea of virtue being something like the pivot point between two vices.   The sometimes contrived comparison between the "secrets of the French women" and the description of typical American habits didn't bother me because I think it works in a book of this kind, when it is done stylishly and consciously.  It works as somewhat of a critique of ordinary American dieting methods, which seem to obviously have some weaknesses since we are not as a nation successfully losing weight.
Posted by Willa at 1:11 AM