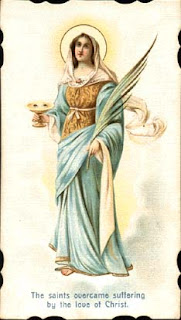 "God is close, ... but we are often far away. Let us, then draw close, let us come into the presence of His light, let us pray to the Lord and, in the contact of prayer, let us become a light for others".

In Anchorage, Alaska, where I grew up, the winter days were very short.  By December, we were going to school in the dark and coming home in the dark, and the yard lights were lit even for morning recess.

And cold -- temperatures below zero, often for days at a time.   They poured water over a rink in November and it stayed ice until March at least.

The countdown during Advent seemed very long.  The sparkling lights and glowing colors of Christmas were even brighter by contrast.

I was in a car with my church youth group -- I don't remember where we were going, perhaps to a Christmas party.   We were members of an Evangelical Covenant Church, which traces its origin to Sweden.   It was dark and cold, of course.  And it was junior high, so of course all the kids were being super-cool, as cynical as anyone who was not a Montecarlo expatriate could possibly be.

One of the girls in the car was from one of the Swedish-origin families and looked the part -- tall, slender, fair with pale blond hair.  I didn't know her very well, since she was older than me, but I remember that she was a nice girl, even in those junior high years of school.   Suddenly she burst into song -- a shower of song in a crystal-clear adolescent soprano.  I had never heard it before, but it was the Santa Lucia song.   It was like the whole world suddenly lit up, like God had given me a gift.  And He had, of course, and He continues to, many times through other people, perhaps without even their awareness that they have played a  part in a wonderful communion and conspiracy of the Trinity.   For instance, Saint Lucy or some of the other Roman martyrs whose stories come down to us in legendary form -- did those young Roman girls realize that their lives would cast light on our lives after so many centuries?


Saint Lucy, your beautiful name signifies light. By the light of faith which God bestowed upon you, increase and preserve this light in my soul so that I may avoid evil, be zealous in the performance of good works, and abhor nothing so much as the blindness and the darkness of evil and of sin. By your intercession with God, obtain for me perfect vision for my bodily eyes and the grace to use them for God's greater honor and glory and the salvation of all men. Saint Lucy, virgin and martyr, hear my prayers and obtain my petitions. Amen.