The Disciplined MInd by Howard Gardner 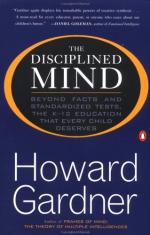 The Disciplined Mind: Beyond Standardized Tests and Facts to the K12 Education Every Child Deserves

by Howard Gardner
who is the pioneer of the idea of Multiple Intelligences
more information on that here
Take a quiz on which of the intelligences is your strongest!

This is an inspectional-level survey of the book.    I have had in on my shelves for about 6 months -- started reading it when I got it and got busy with other things so I set it aside.

Here are a few reviews and commentaries on the book:
I picked it up again this week and read it through in order to get an impression of whether it should stay on my bookshelf for now or move to another home.   I think I will have to keep it for another go-through.

On one hand, I only had to read the first couple of chapters to know I wasn't just going to be nodding my head through the whole thing.    Gardner brings up a lot of issues, which to me is the virtue of the book -- he doesn't hesitate to wade into the Big Questions, and his splashing forays are in the directions where I agree a serious book on education should go.  But he doesn't always take an accurate sounding of the depths.

As the subtitle indicates, he does not think education should be primarily about facts and tests, nor does he think a complete education will focus mainly on the linguistic and mathematical intelligences.   He thinks educational capacity is broad and that most schools are run on an antiquated, industrial-revolution type model that needs to be drastically revised to reflect new psychological and neurological understanding of the capacities of the human being.   In this, his book is thoroughly interesting and provides a helpful overview of some of the different trends in the psychology of education.

He sketches out the "fill the empty barn" theory of knowledge vs the "construct valid models of reality" theory, and comes down on the latter side.    In this, he seems to take on a straw-man version of ED Hirsch's "Cultural Literacy" ideas and assume that a Core Knowledge education will be something like creating an encyclopedia of factoids in a student's head.   I have my own concerns with some of Hirsch's ideas but I happen to know that this is a vast over-simplification of his theories.

This to me warrants some cautions with some of Gardner's other conclusions.

Gardner believes that education's goal is the appreciation of truth, beauty and goodness.  So though his "constructing" theory of knowledge may sound progressive, he claims an ancient tradition of paideia and enculturation.  Of course, I am sympathetic with this.

But I find his definitions and representational examples of these qualities puzzling and sometimes inconclusive.   He chooses three major themes, which he says are simply examples and could be exchanged for others, but which he thinks are appropriate central issues around which one could design a complete education.   They are Darwinist evolution (to exemplify and bring out the idea of Truth); Mozart's opera Marriage of Figaro (to exemplify Beauty); and the Holocaust (in relation to Goodness).

This confounds me, I admit, so one of my goals during a second go-through is to understand better what he intends by this representational theme-motif.   I also don't totally understand how he would use these representations in Kindergarten through 12th grade as the revolving points of a complete education.   So there are a few questions left, to say the least.

I also think that when you put Beauty Truth and Goodness as the goals of an education you should at least be able to outline the historical understanding of these things.   He seems to jump from a very cursory referral to Plato and Aristotle to Keats "beauty is truth and truth is beauty" without much acknowledgment of any of the development of thought between the two time periods.   In fact, he seems to think Goodness refers to moral goodness, which is only a partial understanding.   It could very well be that his scholarly understanding of these things is much beyond mine but I think that the presentation in the book is confusing and this leads to a muddying of his thesis.

There is a very sympathetic portrayal of the Reggio Emilia early-education model which I thought very good and worth another read, and a good debunking of some of the flaws with behavioristic models of education.

So I will probably be keeping this book for now, though I doubt it will have a place on my Bookshelf of High Permanent Eminence.   I hope to blog about it some more when I go through it again.
Posted by Willa at 7:45 AM