What Toys to Hold On To?

How many toys does a child need??? I suppose it depends a lot on the child. And somewhat on the organizing capabilities of the mom, because toys that stay stuck in closets or end up a jumbled mess aren't toys that can be used as they were meant to be.

When Liam, my oldest, was a toddler we had a small basket of toys and that was it. A few times a day the two of us would put all the toys back and then he'd have fun dumping them out and sorting through them again. I don't remember quite when that changed, ...let's see, Sean was my fourth and he was born 6.5 years after Liam and by that time we had a houseful of toys. Our house was tiny, so maybe it wasn't as many toys as it felt like, but, well, it was a lot more than a basket, or even a basket per kid.

It seems to me that a baby/toddler needs toys more than an older child does, because the baby's space is more confined and he can't as easily (or safely) get around and interact with real things. Even so, Liam was happy and contented with his little basket of baby toys.... for 15 minutes at a time. The rest of the time he wanted to do what I was doing. But even if he had a roomful of toys I'm not sure if he would have stayed occupied for much longer. Maybe it would take him just a bit longer to trash the whole room than it did to trash the contents of the basket.

When there were several of them they played more creatively because they had each other. The toys became props and supplementary characters. Maybe that's when I started collecting more toys. If one set of play animals is good then three is better, right? And a new basket of Duplos makes an easy birthday present. Better to just have more duplos than start up with a whole new type of construction set with its own million little units. But soon you have too many Duplos. Where's the cut-off point?

Besides books, toys are even now probably the biggest space-devourer and visual clutter objects in the house. Part of this is because the little boys don't have a room of their own. They sleep upstairs in a corner of the loft. So everything they have is TOTALLY right out there.

I'll show you what I mean! 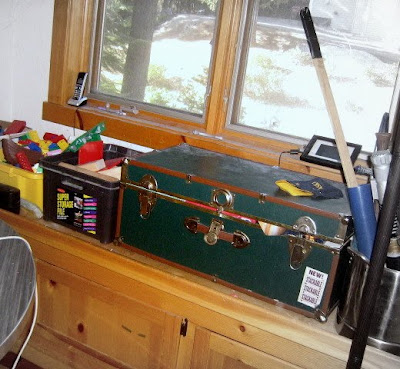 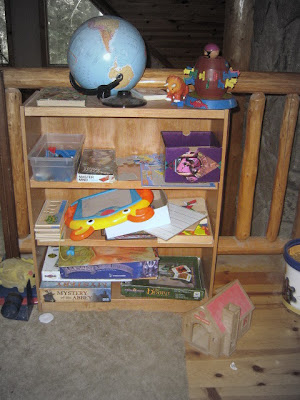 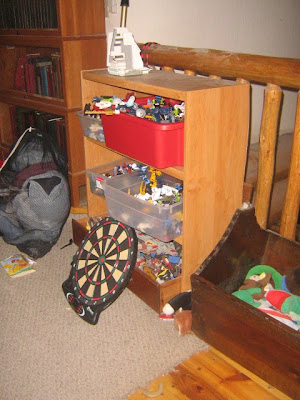 Now let me think... what would happen if I put it all away out of sight? (not really ALL, but a good bit of it) . I'm relatively sure they would pretty much forget they had any of it. ... and they'd be just as happy and just as occupied as they are now. Which means, bored some of the time, occupied some of the time.

What they actually play with:


I already gave away about half of their toys and they did not even notice.

I'll have to think... I really like that out of sight idea. No! More! Clutter!

The other thing that I notice -- the kids use what's around to enact what's in their heads. They don't so much use the toys to inspire their imaginations, as their imaginations to breathe life into their toys. Does that make sense? There are a few exceptions. Hot Wheels might be one. But I've seen Paddy use Hot Wheels as characters in a play, and I've seen Aidan use blocks as pretend cars.

I'm really not planning to get rid of all of it. Right now we have (not counting academic-related things like math manipulatives and letters and art supplies):

That's still kind of a lot, isn't it? I was feeling guilty about thinking about getting rid of even more, but I don't feel that way anymore. It seems pretty reasonable to me right now

And the truth is that they only really use about 10-20 percent of what there is.

Of course, that rule would be scary if applied to books. Of all the books I have (apart from the kids' books, which get worn through by repeated readings) I probably only regularly reread about 5% of them. And a lot of those, honestly, I can find on the internet because most of them are public domain. Do I really need to keep the rest? hmm....
Posted by Willa at 4:57 AM