Last July I made a file folder system divided into weeks. You can see it over here. It became my central planning station along with my binder. After Christmas I stopped using it quite so much but it was still a handy place to stuff things -- old school work, mementos, whatever.

So today I tackled this box, which was absolutely stuffed with papers, and got everything out of there, and used my ROAR formula to sort it into piles (discard/archive/still using). Having it in rough chronological order was a BIG help and a nice payoff for the hour or so it took to set up the system last year.

Then I relabelled all the folders and here it is ready for another year. That took another couple of hours.

(I'd love to buy a whole new color scheme of folders but can't justify it to myself -- last years' were still in good condition. I did pick out a different box, though, and added some new touches, which I'll explain below). 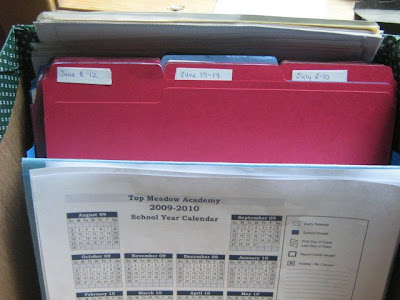 You can see the calendar in the box that I used to figure out the dates on the folders for this year. I cross-referenced it with Sean's high school schedule because I want to go on a similar schedule to his school one.

Here, below, is a calendar showing the details of holidays, first and last days of terms, etc. (Word 2007 version). It's modified from a free Excel template from Vertex. 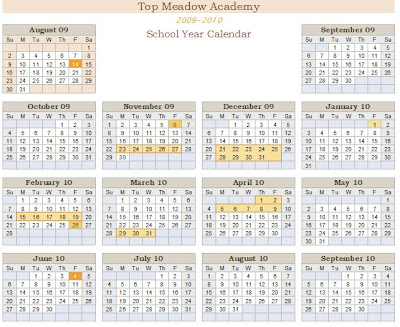 My folder system is simple and visual. Fortunately, Sean's school runs on the trimester system just like Ambleside does.

I decided to add a 6-week term in the summer. For years and years I resisted year-round school. I likes to hold fast to my leisure time, my precioussss -- however, I am thinking that plugging 6 weeks into the summer will give me more "space" during the rest of the year. It won't be that different in actuality, because I always use summer as a sort of catch-up and enrichment season and count what we did towards my record-keeping, but this hopefully will keep me from my natural tendency to zone out on my kids when I'm not officially "on-task".

So we will have basically 42 weeks in the year but they won't be absolutely uniform. We'll see how this works.

I'll probably try to do something with the folders -- for example, put the proposed readings for my 3 boys in their proper folders so that I can tell at a glance whether we're on target or not. But that decision can wait for another day.

Another thing I'll eventually post is a goal list for each boy. I decided to keep goals very simple this year, so as not to lose focus of them. I like the way Deanna at Narrow Gate Academy did hers.
Posted by Willa at 3:19 PM