Warning: Not very environmentally friendly looking pictures below! I really do hate throwing things away!

I decided to proceed with my Tackle List yesterday evening and get rid of some old papers. I made up an acronym to guide me, a somewhat dragon-y one, since usually my biggest problem with a new project is figuring out HOW to go about it. Once I have a method I can usually carry it out OK. And if I have some way to remember it it's even better.

So here's the pile of things I am going to stuff into a bag and either burn (if the weather stays cool) or recycle or just toss. I will probably retain some in a box for scratch paper for my little kids. There's a lot and this is actually the second pass through the closet I've made. But this is accumulated from the last 10 years so it's not like I generate so much paper every year (guilty self-justification here).

OK! I'll just admit that I have a paper problem!! 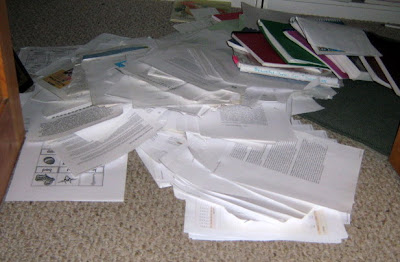 Here's what's left on the shelves (the notebooks are blank -- if they had been used I ripped out the used pages and added them to the sort pile). 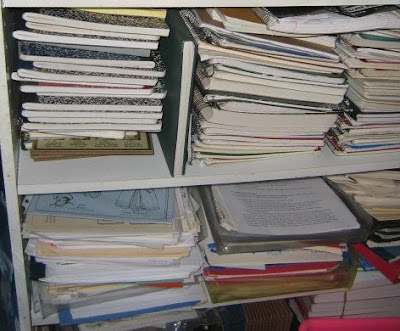 Here's what I have left to look through. 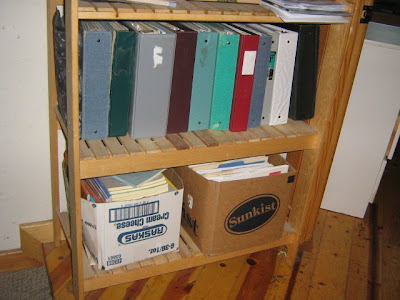 I'm trying to reduce drastically this year (1) because it's been about 5 years since I did a thorough sort and (2) because there's a chance we might be moving so I want to have things pared down as much as possible.

After the initial purge I am going to sort through the remainder and put it in order, then decide whether to:

Even though I hate throwing large amounts of things away (and the lesson for the future is to print out less in the first place, which I've actually been practicing better now that I have my blog to record things of interest) I do like the light feeling of having much less around.
Posted by Willa at 8:44 AM