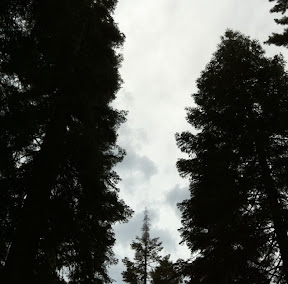 "An inconvenience is only an adventure wrongly considered" --GK Chesterton


Today we could hear thunder in the distance as we packed the SUV with junk to bring to the dump. It was so humid, at least by Sierra standards! Later on it sprinkled a little. Signs of fall.


Erin asked for the backstory-- why we've gone from 7 kids around the house down to 3. I guess that does need some explanation, so here goes.   I'll break it up with pictures so it isn't so hard to get through:


(Credit:  These pictures were taken with Clare's camera, either by her or her siblings or friends)

Our oldest, Liam, had graduated from Thomas Aquinas College in 2009. He had been working for Kevin's computer game company since about 2006, and after graduating, he came back home to continue working and pay down his college loans. Last December he got asked to work at a small computer company where he had interned a couple of summers before. So he went up to Oregon in January.


Meanwhile, Clare went to TAC in the fall of 2009.   Even though she came home for the summer, we were all so busy that I did not see her all that much (especially considering that she is my only daughter!) and now she is back at TAC for her junior year.

My second son, Brendan, was going to college locally and living at home, but now he has transferred up to college in Oregon.

And finally, my 3rd son Sean, the football playing one, decided to move up to Oregon and live with his brothers for his senior year of high school! As a homeschooler who went to public school to play varsity sports, he was getting burned out by an education system so much different from our home one. California's school system in particular has become so regulated and standardized and test-driven that it is disheartening. So last term he did "home study" through a very nice charter, and this term he is in Oregon.

There have been a couple of other changes too. Kevin, my husband, who had operated his own business and freelanced for the last 12 years, is now employed with an Oregon company that he previously contracted for, and even though he can work long-distance, he has been traveling up to Oregon quite a lot to stay involved with Sean's life and football games.

And we are back to DIY homeschooling, rather than using the K12 virtual charter. K12 had good materials by secular standards and it was nice in some ways to coast and rely on someone else's planning, but we started feeling too much inside the box. Because of everything else we may be traveling more this year and so I am hoping to do a more free range type of schooling, this year, for a change of pace!

So that is  Kieron, Aidan, and Paddy, still at home!

So now we are all caught up. Since so much has changed in the past seven months I am sort of looking forward to adventure (preferably the good kind) in the upcoming year. By "good" adventure think The Hobbit rather than The Two Towers, but of course, I will take whatever God wants for us.

So we are somewhat scattered right now, but our multiple story strands are still converging at intervals!
Posted by Willa at 8:24 PM