The Christian Imagination: GK Chesterton on the Arts 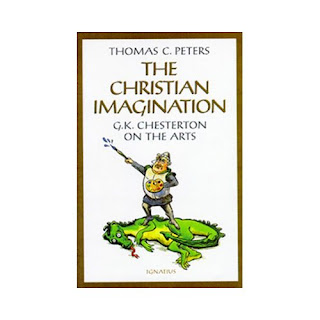 The Christian Imagination:  GK Chesterton on the Arts

by Thomas C Peters
There's not much about the book online.   It was published by Ignatius Press but seems to be out of print, and is getting a very good second-hand price at Amazon.

Here's a review at Touchstone Archives.
Here's a blog devoted to the Christian Imagination which mentions the book among many others.

I wasn't planning to keep this book -- it had been on our shelves for almost 5 years and no one had read it except maybe Clare.   But I finally read it in order to make up my mind.   It strikes me as primarily a container for some real gems of Chestertonian quotes.   The author discusses the quotes, but his writing seems intended to play a subordinate role to the words and thought of GKC himself.   Which makes sense and is the way I would do it, too!  Chesterton's writing output was copious and mostly unsystematic, since he wrote columns for newspapers and articles for a magazine that he helped edit.  So it would be a major undertaking to go through the whole corpus oneself.

Anyway, I am thinking now that I will keep the book, at least until the third cut, and that cover picture is awfully cute, anyway.
Posted by Willa at 7:58 AM