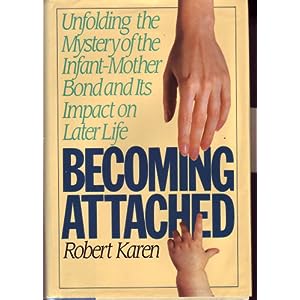 Becoming Attached: Unfolding the Mystery of the Infant-Mother Bond and Its Impact on Later Life by Robert Karen

A preview is available here.
An interview with Robert Karen on the topic of another book The Forgiving Self

This is the second time I have read this book.  The first time was several years ago, when I borrowed it from the library.  I ended up actually buying a second-hand copy because it seems to speak to some of the same ideas that Conrad Baars discusses.

The book is basically a history of how the psychological theory of attachment developed through the 20th century.   John Bowlby and Mary Ainsworth were two of the pioneers of the theory, which has had enormous impact on present understanding of early childhood development.   Previous to this, psychologists tended to think that infants and small children's love for their mother was mostly centered around physical nourishment and that caregiving was interchangeable.   Someone called Rene Spitz filmed children in orphanages who he thought were showing all the classic signs of grief and depression.   Though well cared for physically, orphan children were showing failure to thrive and IQ deficits, while comparable children who were fostered (even by retarded teenage girls in an orphan setting) would thrive physically and mentally.  Later, another man called James Robertson filmed several children in hospital settings.  At the time, people thought that hospitalized children "settled down" better when their parents had very restricted visiting times or were kept from visiting altogether.  Robertson's films, though roundly criticized as not strictly scientific, showed small childrens' personalities fraying under the stress of separation from their families, primarily their mothers.

Bowlby, a psychoanalyst, took case histories of 44 juvenile thieves and found, despite wide differences in family background, a common history of prolonged separation from a primary caregiver.   He also found a similar personality profile of superficial friendliness but eerie emotional detachment associated with the thievery.  The stealing seemed to be a manifestation of a need to attach oneself to something when emotional intimacy no longer seemed an option to the children.    In that way it correlated with separation from a caregiver during a crucial time of development.  Bowlby also was influenced by the ethological studies of Konrad Lorenz who researched the early bonding of ducks and other small animals.  (Lorenz was able to convince ducklings that he was their parent and induce them to "impress" upon him and follow him -- my high schooler was just reading about that in a book called A View from the Oak and it's also described in Lorenz's book King Solomon's Ring).

Later, Mary Ainsworth's work showed three basic attachment styles which could be diagnosed relatively briefly in a designed "Strange Situation"   -- children could be securely, anxiously or avoidantly attached.  The Strange Situation reflected the same profiles she found in long-term in-home observations of families.

In the book, Robert Karen goes on to bring Attachment Theory up to the present time.  I like the book because though obviously sympathetic to attachment theory (which is still controversial and politicized because of day care and other related issues) he presents the opposition's critique of the theory quite thoughtfully and brings in lots of related issues.

For this reason the book is a good "starter" read since it brings in a lot of the related issues and covers a lot of the personalities and terminology.  It also is very well-written, intertwining historical narrative with clear discussion of the issues involved and their ramifications.  It's not a "how to attachment parent" manual or a polemic in favor of attachment; but it is a very readable discussion and survey of the development of the theory.
Posted by Willa at 10:39 AM