Last year, Paddy and I read about Alexander and the Gordian Knot. Given a knot that seemed unsolvable, Alexander raised his sword and simply slashed it through. 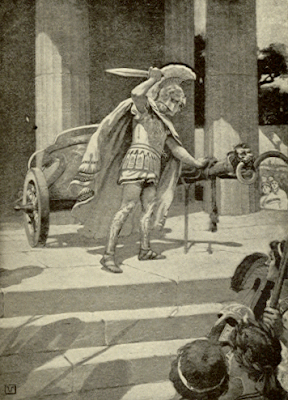 Hmmph. I admit that style can be refreshing and that it is the best way to get certain things done. If you simply want to use the carriage or whatever is tied up, then don't bother about the intricacy of the puzzle. There are lots of things like that in life. I have to remember there are times when cutting the knot works. And I do always admire people who slice through things that need to be sliced. There's a gift there.

I can't help thinking that Alexander's approach showed both his amazing strength and his subtle weakness. Near the end, he wept because he had no more worlds to conquer. .... he had cut loose many, many wagons (speaking metaphorically) and all the bits of string were around his feet, but the wagons had come to a stop. He was still young and all he had ahead of him, as they said of Achilles, was the "long, wizening, connubial years". He almost had to die young. Aristotle, his teacher, never had to weep about all the freed wagons with no new worlds to go to. He had the strings coiled up, solved and ready to use again, with the principles of the solution in his mind. He gave future generations the potential to solve many knots.

That being said, though, I want to remember the bit about doing -- SOMETHING -- to resolve a situation that seems difficult to resolve. I think one problem I have with following up on Aidan's therapy is that it seems so scattershot. The therapist sees a problem and addresses it. I am realizing there is wisdom in that. Given that the whole ball of string is unified, solving a part will help the whole situation and maybe even lead towards a solution of the bigger picture.

This is something I'm trying to remember -- that the string is a unity, even if it seems chaotically particular when it's knotted.    In those cases looking at the Big Picture may actually end up only as perceiving a confused jumble, while picking one place to patiently work at may be contributing to a solution or at least to seeing better what might be needed.   I think what I missed with the therapists is that they already had a Big Picture view -- improving Aidan's ability to move or communicate or handle tasks -- and so they are trying different ways to work towards that goal.

This seems to apply somewhat to education as well -- so often I've tried to find some Big Picture view that would immediately apply to every detail.   I think the big picture IS important and that I've learned a lot from always trying to look for the Best, but at the same time, I think there is value in picking one part of the knot and patiently working through that part.  Sometimes you end up freeing up more of the string than you were even trying to -- sometimes you realize that that bit won't be solved until you tackle it from somewhere else.  But often you learn SOMETHING, whereas if you desert the hands-on altogether, you end up spending more time facing the confused jumble than you need to.
Posted by Willa at 5:44 AM