As Aidan approaches adolescence, his special gift or charism seems to be devoted attention to things that usually get taken for granted, like coolers and the spare tires on the back of cars, and stroller wheels, and the alphabet. In his life, these humble functional devices become players in stories, and decorations, and objects of intense and amused interest.

His other charism seems to be service, in which he becomes the functionary, as devoted and unassuming as the coolers and spare tires. We have started calling him "Jeeves". He notices everything we do and tries to anticipate what we will need next. When Kevin is getting ready to leave for a trip in the car he will find his baseball cap, his keys and his cell phone quietly appearing at his elbow. When he returns the cell phone will be, with no effort on his part, plugged into the recharger; his cap will be hung up on its peg and his keys will be back on the shelf where he keeps them. Aidan takes delight in these small details: he reminds me of the little Pixar robot Wall-E and also of Newman's gentleman:

He is mainly occupied in merely removing the obstacles which hinder the free and unembarrassed action of those about him; and he concurs with their movements rather than takes the initiative himself. His benefits may be considered as parallel to what are called comforts or conveniences in arrangements of a personal nature: like an easy chair or a good fire, which do their part in dispelling cold and fatigue, though nature provides both means of rest and animal heat without them.

Similarly, in the kitchen -- when I make bacon I'll find paper towels spread out on the counter next to me for the bacon to drain on. When the tea-kettle boils it is quickly and neatly placed on its customary trivet on the counter, ready to pour. When I start baking muffins and go off to do something else while they are baking, upon returning to the kitchen I'll find them put in the wooden bowl where I usually put them, and the next batch started in the toaster oven (we don't have a real oven right now). The examples could be multiplied.

A new twist today, though, taking into account Clare being home from college.... for context, Clare is the only girl, with six brothers who will quickly devour anything that is being baked. She has learned to set aside her "bit" of whatever is going. Otherwise it will be gone and that speedily. She has a place where she ordinarily keeps her little share -- above her music CDs in a corner of the kitchen.

Consequently, she came out of her room this morning to find this, without any effort on her own part, evidence that Aidan has learned a new step in his muffin protocol, and a new way to add convenience to a family member's life: 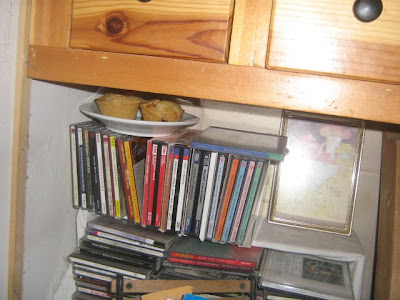