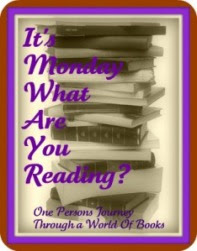 (I got the meme at Laughing Stars Bibliophile. And yes, I know that it's actually Tuesday!).

My friend Chari recommended the Irish trilogy by Walter Macken. I finished reading Seek the Fair Land and have started the second one The Silent People. Good reading. I am determined to read more literature this year. Funny thing for a literature major to say, but Chari and I like to laugh about the fact that she got a science degree and is now "catching up" on great literature and I got a literature degree and am now "catching up" on various forms of non-fiction -- particularly religion, philosophy and science for the general reader!

Staying Fit Over Fifty: a library book. I'm not quite there yet (over 50) but I found this book sensible for over-40's as well, and it helped me get in touch with my inner athlete. Maybe. There were stories of lifelong athletes who kept fit into their older years, AND older people who had been relatively sedentary during their younger years but were hitting their athletic stride in their mid-40's or older. Anyway, I do think if I'm going to meet my goal of actually eating properly and maintaining my good weight in the long term I'm going to have to focus on a goal beyond just that. Does that sentence make sense? I mean that in the past I always backslid because once I met my weight goal there was nowhere else to go.

Look Me in the Eye -- another library book, about a man who grew up with Asperger's and was not diagnosed until adulthood.

Building the Christian Academy -- good book so far, I'm only on chapter 3.

The Secret of the Rosary -- by St Louis Marie de Montfort

Seems there was another one.... but I can't think of it right now. Oh, yes, I suppose

The Idea of Phenomenology (Five Lectures) -- that has to count.

Paddy and I are still working on the Amulet, and I am having a hard time keeping the teenage boys in books. Any suggestions?
Posted by Willa at 4:16 AM