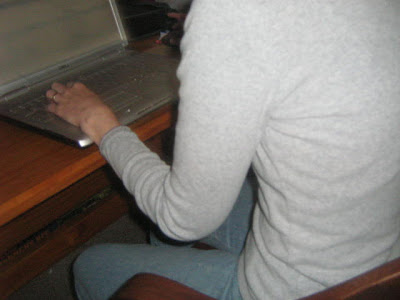 (photo by Aidan)
I made an Internet Regula once -- I never stuck to it very closely.   I used to make plans that were more like wistful dreams than anything else.  But I may revive it, at least as an ultimate goal.

In the interim, though, I've been "fasting" from the computer twice a week -- on Tuesdays and Fridays.   That means no computer until after dinner, and then only to check my mail and FB page and log into my fitness journal.   It's surprisingly hard, which means I have found something constructive to do without.   It's weird because there is no one thing I feel drawn to, that I miss when I'm offline.   It's just the ritual of sitting down and basically zoning that I have incorporated into my day.   I like seeing the big humming world out there, of having everything at my fingertips.   There is a social element and an intellectual element (for lack of a better word) and a visual element.   There's even almost a contemplative element.  Really, it's not surprising that so many people spend so much time on the web.  It's like having an extra sense.

At the same time, I tend to drift -- I get on the computer to do something, like email my Mom, and then spend 20 minutes and completely forget what I was on there for.    That's not really very good.  At age 47 I don't have ALL that many minutes left so I don't want to waste them.  So I have to consider the possibility that some of that social, intellectual, visual, emotional, contemplative aspect is actually a distraction -- like sugar genuinely boosts your energy but also has a backswing effect. 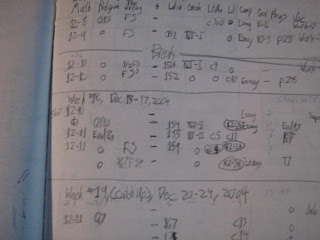 On my fasting days, I find that I have to get out my old spiral notebooks and write notes. (that photo is actually of one of Liam's old schedules that he wrote out in high school -- but I thought I'd put it in here because the text needed a visual break)  Actually I have made quite a bit of progress in thinking some things through for next year.  I also read more when I'm offline.  Can't say I really get much more housework done or spend a lot more time with my kids.  I've found that I have an energy ceiling -- I'm not sure why.   I used to think it was being slightly overweight and eating junk and not exercising, but it's still there even though I'm doing better with all that.   Maybe there's a long term component.

Since I have this energy ceiling and can't do all that much beyond that level I am trying to fix everything so I don't NEED energy so much.   That's what I'm going to be writing about this week on this blog.

Oh, another change I am planning to make -- write out most of my blog posts on the weekends (which is when I do the most writing anyway since I have more time) and then post-date them.  I got this idea from my daughter and I'm looking forward to trying it out.
Posted by Willa at 8:05 AM