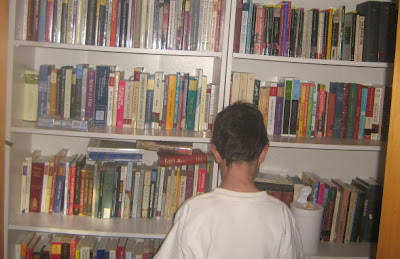 I'm going to classify the books in my house on a usability scale. This first part is mostly the books I've acquired for the juveniles in the house since the books my husband and I keep have a different scale. (that scale is below)

In case you're wondering WHY I'm doing this, I'm trying to figure out how to get rid of the deadweight in this house and I'm afraid that some of it is books that haven't ever been read by anyone. I come from a bibliophile home and I love the look and atmosphere of books, but I'm realizing that to respect the ones that are truly treasures around here I have to let go the ones that aren't, no matter how much I wish they were.

The thing is that the fourth level books rarely get used in my house. These levels of complexity almost seem exponential so by the time you get to the fourth level it's about 9 times as difficult as the first level. (I know that sounds like I don't know how to do squares but the first level is "0" difficulty so I go from there). I've gotten rid of the vast majority of those already because I know by now they just sit on my shelves.

Of the third level books -- most aren't likely to be used unless either I or the kid is very motivated. So I probably only need a few of these around, the core ones. Otherwise the whole lot ends up being deadweight on the shelves because when there's too much of something, my kids and I just don't pay attention to it anymore.

Most of our books should be the kind that don't need much push, I think, and then the third level books should be the Really Important or Very Satisfying kind. For example, the Ambleside books are satisfying. And some homeschool materials that teach core subjects are fairly important as well.

If we do have a fourth level material around it should be something I really have fun with. Like Spell to Write and Read. Or Mary Daly's Whole Book of Diagrams. These I just LIKE.

Level One -- indispensable bestfriendsforever books, the kind of books I'd like to have with me on the legendary desert island.

Level Two -- pretty nice to have around. The kind of books that make good companions to hang out with... maybe Catholic books on various topics, or classic novels, that kind of thing. A lot of times these books get read by my teens and young adults as well. But every now and then I can look them over with a critical eye and make sure they are still pulling their weight.

Level Three -- niche books. They were useful or enjoyable at one time, or I hoped they would be but the time has passed, or I have more than I really need (my pregnancy and parenting your toddler type books, dh's chess books, extra cookbooks). Those can go. (I don't mess around with my husband's books unless he hands them over to me to discard).

A similar scale could be used for videos, tapes, CDs and DVDs but I haven't got to those yet because we don't have as many and they don't take up so much room.
Posted by Willa at 7:15 AM