tangles and solving them

When I was little I used to watch with fascination as my grandpa patiently worked away at a string that had gotten tangled. He loved to do things like this -- he was deft and patient, almost contemplative as he worked away at a seemingly hopeless tangle of string. Eventually the string would fall loose in his hands and he would show me proudly the freed length of yarn or rope or whatever. He influenced me enough so that even as a child, impatient and not too skilled as I was, I would spend time trying to undo some tangle or put into order some mess in emulation of him, and for the delight of seeing the final resolution -- the tangle freed, the drawer neatly categorized .

Even bigger than that was the respect implied for the thing itself, the almost humble attentiveness involved in solving something step by step that to initial appearances was unresolvable. To me as a child, it seemed to exemplify a kind of faith, hope and love. 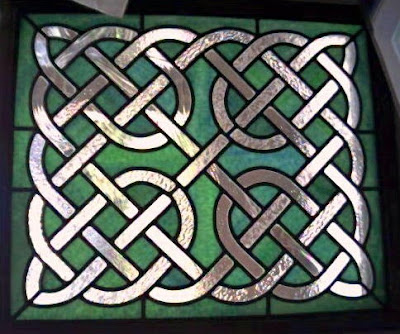 I was just thinking about that this morning. My natural turn of mind is to reach for the higher ground when I'm thinking about doing something. So maybe, when I'm contemplating teaching math, I will try to research pretty much everything ever written about math and come up with some Higher Principles that will direct everything. This is all very well. The problems are these:

In the first case, I think it's helpful to remember my grandfather's approach with the tangles. Sure, maybe he'd look over the knot briefly before he started, but for the most part he was solving the knot as he worked. He would just start somewhere, anywhere. Because it was all one piece of string he knew that eventually his fingers would find the ends and then it was just a matter of work and patience and time.

So say, for teaching math -- if I sit down with a child and try to teach him math, I may not choose the perfect start, but if I am wrong, the feedback the situation gives me will help me to find the "end of the string" so to speak and I'll slowly work my way towards untangling.

Yes, I realize a child is not a passive thing like a string. But I'm not talking about the child as learner here so much as the general situation -- here's a child -- here's the math -- what do I do now? In a way, my grandfather would let the string show him how it should go, and that's sort of what teaching is like in some ways. Also, he would work patiently -- he never jerked or yanked, because that just tightened up the knot, and sometimes would run the risk of breaking the string altogether.

Simpler with the house, perhaps, because the house isn't a free agent, though sometimes it does seem to push back at me. But starting SOMEWHERE is helpful. I may have a general plan or goal in my mind, and it may be very helpful to have some principles for prioritizing, but at some point I need to just start and let the house itself show me how to proceed. And patience is important there, too -- a kind of willingness to deal with an ongoing situation and not expect rigidly perfect, lasting results. After all, strings tend to tangle up almost as soon as you let them go, and you often end up untangling them more than than once.

I also think of Aidan's therapy. I think one reason I'm not always very good about following up at home what the therapists have worked on in a session is that it subliminally frustrates me to see a generalized difficulty approached piecemeal. "Oh, there's a problem -- let's see how to tackle it." I need to remember though, that a child's body and spirit are a mystery -- the therapists are dealing with mystery, just as teachers are. They are respectful in trying to find the loose end and unravel things from there, rather than imagining they can just look at the tangle and do some sort of therapeutical hocus pocus. Since the string is all one, they figure that if they start somewhere, it will lead somewhere, and then they can go from there to somewhere else. Anything that helps will help the whole tangle. It's much more of an art than a science in that sense.

In that way, there is no "wrong" start, so long as you start. And there's a kind of faith and hope and charity in starting, even not knowing for sure where it's going to go.
Posted by Willa at 5:04 AM