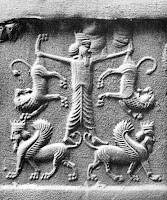 Moving on to the second part of the Prologue of Founding of Christendom.

Adam and Eve were created with particular gifts.

After the Fall, our intellect was darkened; our control over our passions was weakened; and we were no longer free from suffering and death. We are more liable to error, more likely to be led astray by temporal things, and we have inherited an inclination to sin. We were blind, in pain, and subject to the appalling indignity of eventual death.

Dr Carroll moves in discussing this to what might be called the historical perspective. It's not necessary to assent to the distilled doctrine of the Baltimore Catechism in order to observe empirically that man, historically, is haunted by death, rather literally. A dog isn't, for instance, though some people read into an animal's psyche what is in reality unique to their own.

Dr Carroll writes, talking about the still-open question of when "true" men (ie ensouled) rather than anthropoids appeared:

"The first tangible proof of the existence of true man on earth is to be found in the fact that the earliest true men buried their dead. To all animals death is a part of nature -- sometimes to be mourned, as a mother beast will mourn her dead young, but never frightening or uncanny, because for an animal death is the end. But to all men -- except those of our modern age most insulated from reality by sophisticated rationalization -- deaht is a ghastly mystery, a sign of fear..... We think it natural that most men, especially primitive men, should be afraid of ghosts. But what in the world is natural about it? .... We fear the dead because in the depths of our being we feel that they ought not to be dead and might not stay dead; because they remind us of what we would much rather forgot. That some day we will be as they, and because we cannot understand why this should be, and how it will be. ..."

The perceived uncanniness and unnaturalness of death, along with its utter inevitability, is something that he brings up in future chapters in the context of some of the ancient civilizations. It is utterly human and a recognition of something very wrong:

God in the Dock

Nothing will reconcile us to the unnaturalness of death. We know that we were not made for it; we know how it crept into our destiny as an intruder; and we know Who has defeated it.”

Though one might think that being haunted by death was a primitive thing, even modern skeptics are not immune to it. Freud wrote

"As an unbelieving fatalist, I can only sink into a state of resignation when faced with the horror of death."

CS Lewis comments that this is not really a victory -- fatalism and desire to efface oneself or make oneself indifferent is just a detour away from the reality of things.

"I am not so much afraid of death, as ashamed of it."

and there was this element, too, among the reactions of men as they become more civilized, but no more reconciled to the horrifying absurdity. Chesterton seems to expand on this theme in A Defence of Skeletons:

The truth is that man's horror of the skeleton is not horror of death at all. It is man's eccentric glory that he has not, generally speaking, any objection to being dead, but has a very serious objection to being undignified. And the fundamental matter which troubles him in the skeleton is the reminder that the ground-plan of his appearance is shamelessly grotesque. ....He sees a whole universe which is ridiculous, from the animalcule, with a head too big for its body, up to the comet, with a tail too big for its head. But when it comes to the delightful oddity of his own inside, his sense of humour rather abruptly deserts him.

David Hicks in his 9th grade curriculum suggestion says that students should read the archetypical myths across ancient cultures.... like the Babylonian and Greek and Akkadian stories of Creation, Origin of Evil, Flood/Deluge, Nature of God, Origin of World Languages. Death would probably be another haunting archetype -- there are so many stories about heroes going down to the land of the dead to rescue loved ones -- all across cultures.
Posted by Willa at 12:51 PM