"I rose up and am still with Thee." After His labors and His humiliations, Christ finds rest with His Father. "I am still with Thee." This is perfect beatitude. Through His cross He entered into the possession of eternal glory. Christ has gained the crown of victory; through Christ men also win their crowns of victory.

We went down to town to celebrate Easter with an extended family brunch. A smaller group than usual (only 24!) but fun. Aidan was pleased because he won ten dollars in the egg drawing that his Grandma holds every year -- that's the Big Prize. Paddy got to play with his younger cousins. Then back home and the "Easter squirrels" (sorry but we have no bunnies up in our area and squirrels seem to fit the "fertility of spring" motif as well as rabbits) hid baskets upstairs for all the younger generation. The girls watched Jeeves and Wooster and ate their candy and later on studied. The boys ate candy and played games. Liam played his classical guitar for a long time. We had a simple dinner of bacon, ham, and lettuce sandwiches on toast. I have been reading D'Aulaire Greek Myths to Paddy. I find them a trifle disturbing -- I didn't realize how close they were to Ovid and I got a rather bad impression of Ovid a few years back. However, on the bright side they are explaining a lot of things left unexplained in Paddy's Greek unit for K12.

Father of love, source of all blessings, help us to pass from our old life of sin to the new life of grace. Prepare us for the glory of your kingdom.

I think I'm going to start reading Acts to the boys. .... seems like a good time.

Baskets of candy all over the place! It snowed all day -- we must have gotten over 20 inches, and it's April! Because we were snowbound, Brendan didn't go to college today and Sean gets today off, so our holiday was prolonged a bit. Kieron and Paddy did their K12 -- since they did subjects last week they had a light day. More Jeeves and Wooster DVDs -- we went for a walk in the afternoon (all the boys, Kevin and I) -- it started to hail while we were out. In the evening I made tacos and enchilada rice -- Clare sang and played the guitar -- now Paddy and the girls are dancing to strange music (Home Grown Tomatoes?). I chatted with my little brother on Gmail (I didn't even know Gmail had a chat function). I worked a little on Kieron's history -- but I can tell it's outside of my comfort zone because I keep procrastinating. I am so not a lesson planner -- I love ideas -- I don't mind actually teaching -- but I really hate the middle ground of working it out.

Not much going on today. Very, very cold outside. I worked on school with the guys. I also packaged some books and other things to send off. Besides that, I can't remember much of what I did. It's interesting how much Paddy retains of history -- he had a military board game out the other day and was making the Greeks, Persians, and Egyptians battle each other. I read some of Norms and Nobility and continued The Founding of Christendom. We ordered pizza for dinner since this is the last full day the girls will be here for Easter break. Liam is going back with them on Amtrak since he has a wedding to go to in the area. Kieron is trying to learn to play the piano. In the evening I talked on the phone for a couple of hours with a friend. I also talked to Liam for a while.
Easter Wednesday

Kevin shopped in the morning, so lots of groceries to store away, and in the afternoon, we took Clare, Liz and Liam to the Amtrak station. I hate saying goodbye. The break was such a nice corner in the year. .... even the snow seemed to work since it made the house seem cozier. Finished reading "D'Aulaire's Greek Myths" to Paddy.

I put some effort into fighting off a cold so I rested most of the day and read ancient history books in preparation for next year. Started reading Jungle Book to Paddy. Why have I never read this one aloud to any of my kids??? It's really fun -- great syntactical pacing.

Kieron just asked if we were exempted from abstinence since today's a solemnity (as is the whole week). My best guess is that the answer is "yes", though it hasn't changed my plans for a fish dinner. I drove Brendan to college and took Aidan for post-Botox physical therapy. We were there over 2 hours! Aidan got a workout all right. The PT cut down his brace hoping to get him to do more of the flexing action by himself rather than use his leg like a sort of peg to propel himself with. I also went to Mass and dropped off three more boxes of books at the library since they are having a sale next weekend. Oh my, I will NEVER let so many extra books pile up around the house again. This is a major cognitive shift for me -- minimalism in books (relative, that is -- we still have shelves and shelves of them).

The weekend passed in a planning haze! Not much happened in actual life -- Sunday evening it started to snow and today it's still snowing. 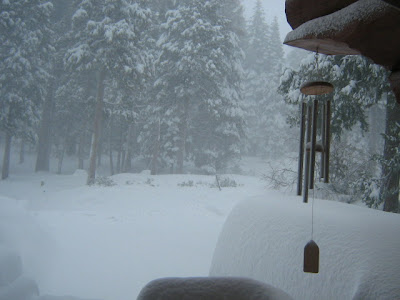