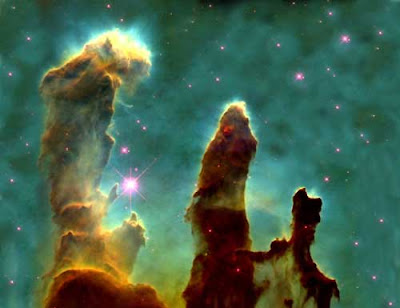 I'm on to the Prologue in Warren Carroll's book Founding of Christendom. It is subtitled "In the Beginning" and it basically sums up Creation and the Fall. This is a "connection chapter" -- it is short, only 4 pages long, but it brings in not just history but theology and natural science, and even connects to literature and philosophy in the sense that some Big Questions are raised about the nature of things and man's response through the written word. These are all inevitably related whenever you talk about how things started. How could they not be?

First, what is "history"? When did it begin?

The word comes from a Greek word meaning inquiry or knowledge acquired by investigation. That's why science could be called "natural history" in the Renaissance, and why you get terms like "case history" or "medical history". It is related to the word "story" and this is because history is in many ways intrinsically narrative. Even in the dryest exposition of economic trends or population charting, the chronological and narrative basis of the study is still implicit. (This is my thinking, not Dr Carroll's, so if it sounds stupid it's not his fault).

Dr Carroll says history, broadly speaking, began with the appearance of the first human beings on earth. That is why he starts there, though of course there are no written testimonies of those early times. Most historians make a distinction between "history" and "prehistory" -- in this use of the words, history proper began with the first written records. The Book of Genesis in the Bible goes into detail about Creation, but of course was written much, much later. It's a secondary account insofar as it was written by human agency, which is an important qualifier (Yikes, I will not be able to help tripping over theology everywhere in this!) . I will be having my high schooler read Genesis while reading these first few chapters of the book.

Since most creation stories of the time were wild speculation, Genesis was written at least in part to consolidate the very different Hebrew understanding of God and the First Things. A book called Genesis: The Book of Origins by Father Albert Shamon goes into more detail about this aspect of the book.

Cardinal Ratzinger in a transcription of a homiletic series published with the title of In the Beginning discusses the Catholic understanding of some of the main issues about the earliest times. I will not be able to do that aspect justice in this post. There's a PDF article "Reading Genesis with Cardinal Ratzinger" by Fr Austriaco and to hone critical skills you could read this "Rebutal" (sic) by the increasingly quirky R Sungenis. Sungenis does include a LOT of documentation in regard to papal encyclicals in his article which could be valuable for a research project, but I think his arguments skirt the issue. I doubt if I will go much into this with a 14 year old but it would probably be fun with an older or very motivated student. I probably will have him read at least some of the Fr Shamon book.

A side note -- just after I read the poem Creation by James Weldon Johnson in the Fr Shamon book, I read that David Hicks recommended it for Grade 9 Greek history in his Norms and Nobility. You can see Rev Johnson read it here. Kieron read it this year for K12 and I remember telling him that Rev Johnson took poetic license with saying that God was "lonely". How could a Trinity be lonely? I guess a poem's not supposed to be a treatise or creed though : ).

For additional resources, Humani Generis is a pivotal encyclical which is quoted in this chapter, and is recommended reading by Mother of Divine Grace for 10th graders. I think I will have my student read this towards the end of his science year. Hedge School has a resource about Creation from a non-young-Earth perspective (see sidebar). There is this article by William (not Warren) Carroll called In the Beginning

Dr Carroll quotes Genesis 1:1-4 and John 1:1-5 which both discuss the beginning of things. Revelation 1 also deals with the big picture of what the cosmos is about.

"The earth came out of the starry heavens, and out of the earth came man. On both points the Book of Genesis and today's scientific theories agree. .... but in the last analysis, questions of geologic time and organic evolution, though fascinating, are not of primary importance to the Christian."

It's at this point that he quotes Humani Generis which makes the distinction between science's province and religion's. There is also this collection of Church Fathers on the topic of Creation and Genesis. Father Shamon says:

Faith says, "God created the heavens and the earth." It does not say HOW. Let science discover that. Faith says, "God is a God of order, not chaos." Let science confirm this by discovering the laws and order that are built into the physical universe."

This is a very plain way of putting it. Here's a summary of the essential doctrine about Adam, Eve and Evolution. Basically, each human soul is a special creation, made in God's likeness, no matter how the evolutionary descent thing was worked. Science has its own sphere of independence but it can't deal with the areas outside its own province. It would be like trying to describe the Green Forest if you were a baby rabbit who hadn't been outside the briar patch. You couldn't describe the forest in briar patch language, except by analogy and illustration and "type".

But I can't do that justice here either. There are lots of great books about the relationship between science and religion -- Father Jaki's Savior of Science is one that I've read, but it's not an easy read, and another is The Mind of the Universe, a wonderful book but steep, about the boundary questions which link science and theology, which I've started but not finished. The Language of God, by Francis Collins, is clear enough for a high schooler to read and is of interest because the author is an eminent geneticist, an evangelical Christian AND a former homeschooler (back in the 50's!). He calls himself a theistic evolutionist. If I was going into a lot of depth on the topic I would have the student read this last one -- Collins has a pleasant writing voice and the book woke my up till then dormant interest in DNA -- I went on to read several more books on the subject through the years.

I'll stop now! Even though I only got halfway through the Prologue, it covers Creation, the beginning of natural science, and the beginning of human history. So though this seems long, it did cover a LOT of ground all things considered! I won't be spending so much time on every chapter of the book, or I would be writing a book myself : ).
Posted by Willa at 9:24 PM