Well, it is snowing, a sort of rainy snow peculiar to the mile-high mark of the western Sierras. The world outside looks like a black-and-white picture, a moving one with the huge trees swaying and the snow coming down sideways, in both directions, like it can't decide. 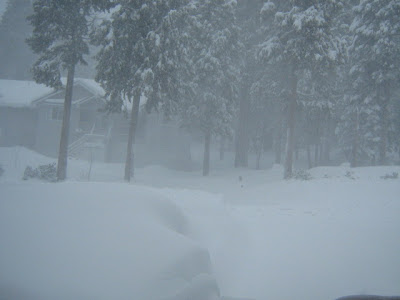 Our hot water faucet in the kitchen broke a few days ago so I have been either going to the downstairs bathroom to get warm water, or else heating up water on the stove to rinse dishes and scrub counters. Things like that always make me reflect -- it's been so recently historically that we've had hot running water and indoor toilets. Heating up water on the stove, especially when all I have to do is turn on the tap and turn on the stove, makes me think that if hot water taps weren't standard, it really wouldn't be all that big of a deal being without it. Yet, somehow, because it IS standard to have hot running water in the kitchen, one feels somewhat deprived and noble at the same time when one has to take those small extra steps. 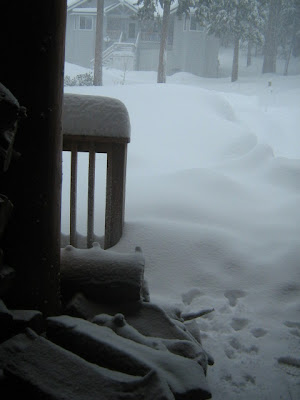 There are lots of other things like that, and generally speaking now, I wonder if "standard" ends up interfering with a serene spirit. They used to call it "keeping up with the Joneses" but it's not even that -- it's not even the crass material status thing, it's just that you almost feel guilty and shoddy if you don't have something that you would normally take for granted. Like you are settling. Or, you feel very wonderful about yourself for being strong enough to resist the pull of something that most of the people around you happen to have. Both of these seem like mental clutter, but my point would be that the culture puts quite a lot of that kind of mental clutter on you and you have to actively work against it.

But the work involved isn't strenuously laying out a philosophical position for or against hot running water, or whatever. That is fun, but it isn't the real work. The real work is keeping a sort of interior spirit, a set-apart temple of a sort where you can recollect the Presence of God, the changeless Center of things, as the warmth and light of our mountain home sets us apart from the cold flurrying weather outside . Or so it would seem. 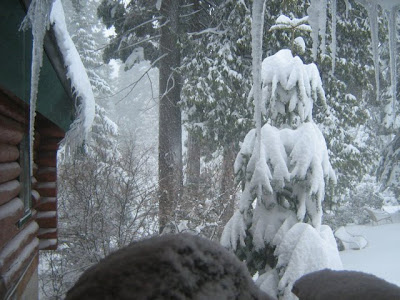