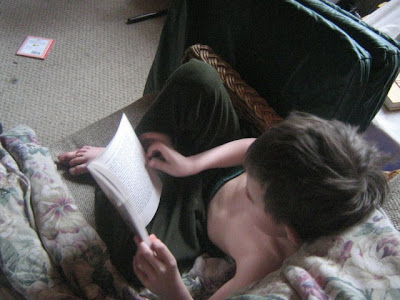 I am so glad I read the Winnie-the-Pooh stories to Paddy before he could read to himself. He loved them and I ended up reading through them twice for him. Now he is rereading the stories himself for about the third time. Sometimes I think Paddy -- dreamy, absent-minded, bouncy, anxious, dignified, sensible and officious by turns -- has something of almost all the Hundred Acre Woods inhabitants inside him.

He came up and showed me a bit that made him laugh:

"I ought to say," explained Pooh as they walked down to the shore of the island, "that it isn't just an ordinary sort of boat. Sometimes it's a Boat, and sometimes it's more of an Accident. It all depends."
"Depends on what?"
"On whether I'm on the top of it or underneath it."

Since he is child #7 and surrounded by much older siblings, all the more reason for him to have a chance to dwell in the world of Very Small Animals once in a while.

The other day I was telling him I did not think he would like a book that he wanted me to read to him (one of the later Harry Potters, if you want to know). I said it had several kissing scenes and that he would not like those.

He said very earnestly, "But Mom -- I've seen Lego guys with hearts in their eyes."

He's talking about this game, I think.

He took this picture of our old dog Frodo. 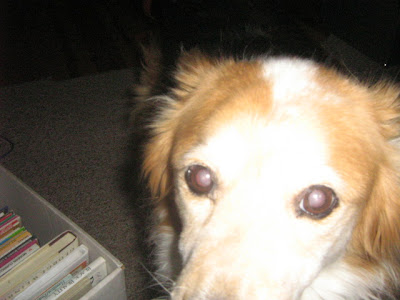 There was a Charades game in the K12 phonics lesson yesterday, and we had such fun miming such things as shining a flashlight and spying on somebody.

And inspired by this, he started playing Pictionary with me and then made up his own card game with some matching Go Fish type picture cards. It's called "Best and Worst". Everyone draws their "worst" picture and then their "best" one and then the object is to try to collect all one's "best" suite and avoid getting one's "worst" suite. Simple game play but quite fun. Kieron, Paddy, Aidan and I played it while the older ones and their Dad were watching Slumdog Millionaire.
Posted by Willa at 3:39 PM