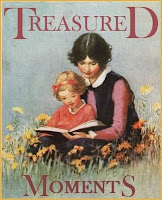 I haven't been reading many blogs for a while, so I only just found Erin's meme at Seven Little Australians Plus One. (By the way, this is the first time I realized that the title of her blog was the title of a book, though I should have guessed!)

I invite you to join us every Saturday and share your plans and ideas, your targets and goals and your stories ... your 'Treasured Moments'. In this way we may inspire one another, encourage ourselves and start achieving our dreams.

I'm a day late, but I wanted to give it a try. For now, I'm just going to list a few things that happened last week that were "treasures" -- but I'll be reflecting about the whole list as I move through next week. I wish we had taken pictures, but maybe, next time.

Last week we went down to the open land below our house. Kieron remembered finding elderberries there with his father and older sister many years ago. Sure enough, there were three generous sized trees loaded with ripe elderberries.

This is only the third year we've really picked elderberries, though usually the older kids eat them off the trees in the fall. I've been plucking them off their branches and freezing the berries in little packets (except that Brendan's always taking a packet out to eat them : )).

I just recently found out that black elderberry is a remedy for flu.

Kevin decided that it's fun to chain-saw. He started clearing our lot that's for sale and then ended up cutting down a bunch of trees that have been encroaching too near our house and providing an entrance route for destructive Sierra Douglas squirrels into our roof.

Aidan loves to see the trees fall, the boys get a workout clearing away the fallen branches and things, and Kevin's sawing up the trees so we will probably save quite a bit on firewood this spring. Of course, most of it is still unseasoned, but some of the trees were dead or close to it, and incense cedar doesn't take long to season compared to the green oak we dealt with last spring.

Reading Lord of the Rings.

Paddy, age 6, just LOVES listening to this. It's a great start to the day.

This week comes St Therese's feast day and also the decade anniversary of Aidan's liver transplant. This anniversary is a mixture of joy and other feelings. Particularly so, because last year at this time we were up in Oregon at a family reunion on the coast. My dad got to see Paddy for the first time ever and play the "patriarch" for a while with almost all his ten grandchildren around him (Liam was at college and Sean had to stay home because of school).

Seems odd, that almost all the most treasured moments are mixed with poignancy a bit.

We will really be missing Clare this week! She's been gone for over a month now.
Posted by Willa at 8:40 AM