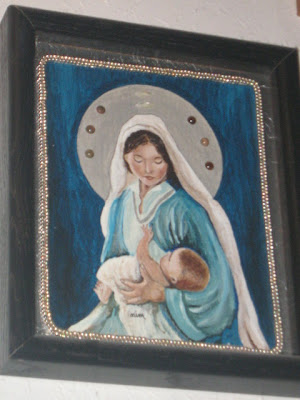 I mentioned Our Lord's Mother, Mary, in my last post.

As a convert from Evangelical Christianity, who was raised by devout non-Catholic Christians, I feel some awkwardness talking about Mary. I was not raised with the language and I know there can be misconceptions about what Mary means to Catholics, because I had to get past some of them myself before I converted. Thus, it's hard to start, but it has a lot to do with my conversion, and one of the things I was asked to blog about was my conversion, so I think it may be good to lay the groundwork.

I would like to start with her own words about herself, which like everything to do with Mary, is really to do with God and His works. These are beautiful words, and if we could only live them out as they were said and lived by her, we would be all that we are called to be as Christians. This is called by the Church the Magnificat. It's recited daily by those who say the Liturgy of the Hours.

My soul doth magnify the Lord.
And my spirit hath rejoiced in God my Saviour.
Because he hath regarded the humility of his handmaid;
for behold from henceforth
all generations shall call me blessed.
Because he that is mighty,
hath done great things to me;
and holy is his name.
And his mercy is from generation unto generations,
to them that fear him.
He hath shewed might in his arm:
he hath scattered the proud in the conceit of their heart.
He hath put down the mighty from their seat,
and hath exalted the humble.
He hath filled the hungry with good things;
and the rich he hath sent empty away.
He hath received Israel his servant,
being mindful of his mercy:
As he spoke to our fathers,
to Abraham and to his seed for ever.

This is a powerful statement, eloquent and beautifully balanced. As a woman and a follower of Christ, Mary is my role model.

I am fortunate enough to have my own mother as an earthly example of Mary's witness. My mother often pointed the way to Jesus through her daily life, her prayers and study of Scripture, and her simple acceptance of various trials that came into her life. When I looked at her, I could see Jesus by His effects in her heart, mind and soul. She did not talk at great length about her faith; she "pondered these things in her heart" and they were (and are) like a breath about her. There was a time when that was almost the only thing that kept my precarious hold on my faith.

The essence of loving Mary as she would want to be loved is in line with this; by gazing along with her upon our most-beloved Lord, and loving Him with all our hearts and souls. It is a witness and example. Though not all non-Catholic Christians ponder much upon Mary, I think it's safe to say that all devout Christians, by virtue of being Christian, try to live, to the extent they are able, the way Mary lived.

Most if not all of the Madonna pictures through history show Mary with her head turned away from the picture and her entire loving, restful gaze upon her Child. This is not an accident. It expresses the thing most obvious about her whole life.
Posted by Willa at 5:03 AM