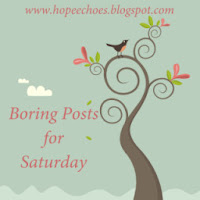 This boring post for Saturday is a day late. I got busy yesterday with various things and didn't have time to sit down and write, though plenty of boring openings for posts slipped in and out of my mind as I went about doing other things.

I thought I would try to talk a bit about what life looks like around the house these days. Even though those are boring to write and not too thrilling to read, they are like a time capsule -- when I find them several years later I'm always very surprised how things have changed.

This morning Kevin (my husband) took Clare (my daughter, 19) and the two little ones, Paddy (6) and Aidan (just 10) off to their grandma's cabin by the lake. He is going to take them out on the boat and Paddy can play with his little cousin Declan. Kevin told Paddy last night that if he didn't wake up in time, he was going to get left behind. As a consequence Paddy burst into our room wild-eyed at the crack of dawn this morning, afraid that he had been deserted. I told him he could go back to bed and I'd be sure to wake him up. A few minutes later Aidan showed up, having wet the bed. His mild cerebral palsy seems to affect his night time continence, but he feels too grownup to wear Pull Ups at night, so I end up doing lots of laundry.

At 8 am I was feeding them breakfast (toast and peanut butter) and talking to Clare.
At 8:30 they were off. It is quite rare for me to be alone in the house as I am now. All the teenage and adult boys are sleeping. Liam, the oldest, is home at present, having graduated from college this May.

It has been cold up here in the Sierra Mountains. Cold day after cold day. Brendan said he could see his breath when he was taking out the trash last night. Kevin has mostly stained the deck now but had planned to have the work done much sooner, only he can't risk laying down the stain and then having it rained on. It is oil stain and does not react kindly to water droplets. In fact, the effect is like, well, like oil and water.

Next week Sean starts summer football practice. And Brendan is soon going to take assessment tests for the semi-local community college. It's an odd time in our lives, a transition season if there ever was one. Next year, my youngest, Paddy, will be formally in Homeschool First Grade. His birthday is in December, practically the day after the public school cut-off, which put him technically in kindergarten last year though he was six and already reading. The point is that for the first time in my motherhood years I have no preschool kids.

This is also the first year we have a College Graduate. Liam will be going off into the world within the next few months.

Sean will be a sophomore at the high school and playing on the varsity football team.

Kieron is a teenager now and will be in Grade 8, almost a high schooler.

When my life was unremittingly busy with babies and medical issues, I glanced ahead to these present days and imagined I would have so much more energy and time. It hasn't really happened, though. I have less urgent work to do but that really doesn't in itself free up large spaces for working on projects. I think time is a bit like space in that regard. You can move from a thousand square foot house to a 3000 sq ft house, as we did back in 1997, and still find yourself bursting out of the storage space within a short space of time. Maybe it's like that with money too. You can FEEL poor on a mid-range income. Presently we ARE poor in terms of cash income, and genuinely have few pennies to spare. But I know that people who have higher incomes still feel a bit tightly pressed and it's not an illusion. And people poorer than us still manage without starving, just as I know one family of 10 who lived in an 800 square foot house and got by.

With time -- you can have way more time freed up yet if you are not careful, you can find the available moments slipping by just as fast with not much extra to show as a result. So time management has become a priority for me again, though in a different manner than it was before. It used to be I had to skimp and save on time. I was always in a hurry. Somehow I stayed a half step ahead. Now I have more time. But it's easy to fritter it away, as you can with money and space. I requested some time management books from Paperback Swap and am planning to go through them slowly this summer and glean some productivity ideas. So you may be seeing this topic again in future, though I'll bring it to a close for now!
Posted by Willa at 8:48 AM