the family Quest meets with misadventure

We have been up in Oregon all week, which is the reason I haven't been blogging much at all.   For some reason, I never seem to be able to sit and write while we are there.  I think it might be because there are lots of little errands to run, and moments to spend with the older boys catching up on their lives, and also because it's a small apartment -- 2 bedrooms and 8 people.  We do all right but it is close quarters.

While we were up there our (Nissan) Quest ran into some difficulties. We were involved in a low-speed crash.  No one was much hurt, thankfully, but the Quest looks over:

Probably fixable, but since there are almost 150,000 miles on it and it's a 98 vehicle, perhaps not worth it?  We haven't decided yet. 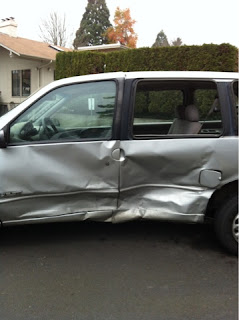 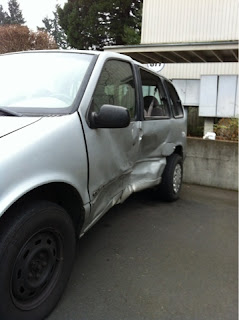 Our family Quest, to try to all get to heaven eventually, still remains in effect, but possibly, some other vehicle will have to convey us towards that destination. We drove back to California in a rental Mazda.

I haven't ever been in a car accident with that much force in it, and I just thought it was interesting that though I didn't feel that much anxiety consciously, I trembled whenever I talked about the thing for the next couple of days. Plus, the two friends I was texting in the hours after the accident both said I wasn't making much sense.

I had a very stiff neck and back for a couple of days; because of the way the impact slewed us sideways, and I also slept way more than usual. Every afternoon I would get sleepy and freezing cold and go off and nap for most of the afternoon -- it was like getting a flu, except that I wasn't getting a flu.

The third day I woke up feeling pretty much OK, though both Kevin and I are a bit more jumpy as drivers and front seat passenger these days.

The young man riding with us at the time, an old friend of the family who was up with us to visit Sean and the other older boys, was at the ground zero of the impact, but fortunately the inside pushed in way less than the outside.  He was sore for a few days, but hopefully is mostly recovered now.

Aidan, in the back rear, didn't appear affected at all.   He seemed to think it was rather exciting, since he spends his life looking for ambulances and fire trucks, and there were a multitude around us.  Later he talked about how the windows "exploded" which from his perspective they did, but fortunately outwards, not into the car.    All in all, his experience of the crash was not at all stressful.

Prayers that everyone involved recovers fully would be appreciated, thank you!

Because we only got back home late last night from Oregon, and today will be a catch up day, I probably won't get to the next section of Keeping House until tomorrow.  Today I hope to read others' posts linked in my Mr Linky Widget.