what are journals anyway? 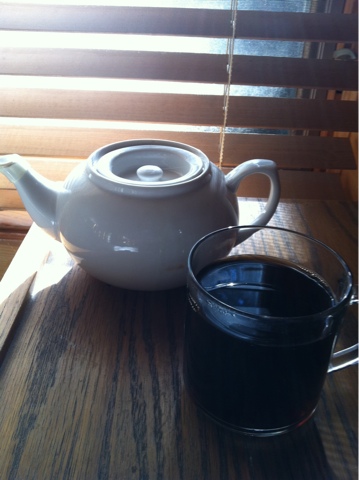 This picture is from Sunday, the morning after we got back from our northern travels, when I could still photograph sunlight.... sigh.   Then the sun disappeared.  But I trust it will return.  And there is still coffee!

My friend Chari at Our Heart's Haven pointed out to me that I wasn't being accurate a few days ago when I wrote after a post:  "This isn't really a journal....more like a mishmash."

So a mishmash of daily events, planning and linking is truly a journal proper.

I guess I was thinking more in terms of a journal as a diary of the day's events( and there is another word that derives from a word for "day"!)


A diary is a record (originally in handwritten format) with discrete entries arranged by date reporting on what has happened over the course of a day or other period. A personal diary may include a person's experiences, and/or thoughts or feelings, including comment on current events outside the writer's direct experience.

Even that is wider than just a narrative of the day's events.

This is kind of a relief.  The format is broader than I had thought.

Bottom line:  There is freedom there.

(Freedom to choose well, which is the part that sometimes trips me up -- I want everything to be the ultimate BEST, and then I get discouraged by the impossibility of that, or locked into a systematic pattern that I've decided is the best.  But Truth, Goodness and Beauty have to be approached, they can't be trapped and contained).

It's a bit of a stretch, but that's the way I've been approaching homeschooling recently.  It is broader than I thought.  I know that when I talk about timelines or reading Shakespeare and haiku to the kids or watching Mental Math lectures, it doesn't really sound like unschooling as it is commonly thought of.  Nor is it quite anything else, like I could recommend it as The Way to homeschool.   But the thing I am trying hard to do (which I can't seem to explain very well) is to open things up, to look at all the possibilities, and choose the one that seems to fit best.   But it seems to work better to choose poetically than to just impose things on us because they seem suitable.

It's hard to explain, see?   It seems to relate to the way the two workers in the parable invested their talents, while the third man buried his.   Somehow "burying" is safe but not expansive.  Somehow, "caring" is needed, and it inevitably involves a kind of reaching to something outside.

When Sean was playing football locally (instead of up in Oregon as he is now), the crowd and the kids would beg the coaches to let them "air it out."  That meant that instead of their typical grindstone offense, "three yards up the middle in a cloud of dust" they would get to throw some passes, do some unexpected things, give the game and the kids a chance to breathe a little. (keep in mind that this is an English Lit major's definition of a football term, and you'll be fine).

There's also that football description "playing with heart."  Sometimes you see a kid who doesn't have it all athletically -- he's small and skinny, perhaps -- but he "has heart".  He plays with all he's got and more.  You can recognize it and admire it and sometimes it changes the course of a game, where on the other hand safe and careful sometimes loses games.

That's what I'm trying to consider  right now in a way.   Just as a journal can comprise all sorts of things, so can a homeschool.  But it has to be directed by love, by "heart" and "breath" not by desire to take it easy, or desire to be irreproachable.  Those are negative goals

For some reason, as soon as I decided that, I started getting interested in things like timelines and art cards that would just make me want to yawn with boredom and stress last year (when we were doing art and history notebooks because we "had to" for our charter).

(I think I was getting burned out even though I didn't realize it!)

Gratuitous pic below -- Paddy having a quiet reading time that same sunny Sunday morning just 5 days ago.  To keep things real, I will mention he is not reading some classic Ambleside book, but browsing through his Dad's Marvel Encyclopedia.   Ah, where would cultural literacy be if you don't know all the supervillains that Spiderman ever fought!

And the violently scribbled creation in the foreground is one of Aidan's coloring pages -- he takes coloring with crayons to a new, bold level.    You may think it looks like the work of a kindergartener who has to color for his teacher and wants to get it over with as fast as possible, but anyone who is familiar with Aidan's work knows it is So. Much. More. Than. That. 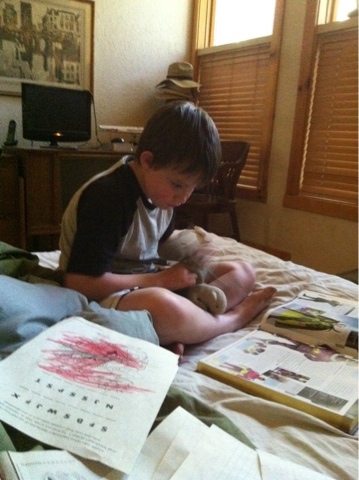