.....Aidan was preparing for his liver transplant.

Here you can see bits of the whole family, except Aidan himself, even though he was the center of everyone's attention.   I am the camera eye ;-).     Clare and Brendan are in the foreground, and Sean is the one on the opposite side of the crib.   Kevin is holding Kieron, but you can't see much of him except a knee.  Liam's head is barely visible. 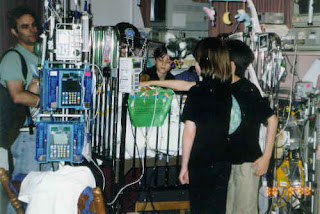 Here you can see Liam's hands, and see Aidan.  He isn't very happy.  They had spent the whole day transfusing him with blood products, because liver dysfunction affects how fast your blood clots.  His own blood would not coagulate, which of course is dangerous in major surgery. 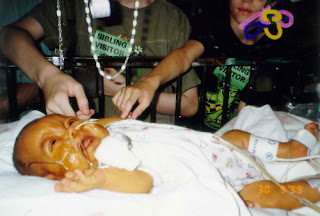 Unfortunately the blood products were too much fluid for him in his heart-and lung-compromised condition.  It was a balancing act that they had to live with.  What prepared him for a chance during surgery was dangerously hard on his little system.  That's why he looks so unhappy here, because he couldn't breathe well -- he was way overloaded with fluid.

Right after Kevin took the kids out of the NICU, Aidan coded -- his heart stopped as I stood next to him  -- "the whole nine yards" as his most loyal nurse said much later.  They had to resuscitate him, and I had to stay back and wait, probably the hardest part of all those hard days and months.

I was afraid they would call off the transplant, but there was really no choice about that, they said.  They had to go forward, since a liver was what he desperately needed, and they had a liver for him, and the window of opportunity was closing.

They wheeled him off with his siblings watching and waving goodbye.     We don't have a camera picture of that, but it's engrained on my memory... the group of little Ryans watching with hopeful concern as their tiny brother went off to struggle against the dragon.

The hospital bent the rules and allowed us all to spend the night there.   Kevin stayed in the surgical waiting room to get updates while I stayed in an unused conference room with the 5 other kids, ages 3 to 13 at the time.   The kids spent the night under a long table since the rest of the room was crowded with extra furniture.   It was quiet, dark and almost ghostly in there, like we had slipped into another dimension to wait out the time.  This was before we had a cell phone so I couldn't communicate with Kevin nor he with me, unless he came to the room (which was quite a distance away from the surgical waiting room).

The kids and I prayed until they dropped off to sleep.   I prayed Psalm 23 with them.... "Yea, even though I walk through the valley of the shadow of death, I will fear no evil...."   The part about the valley was literally true, so I feel like I have walked through that shadow once at least.

Thus began a long vigil.   It really sometimes feels like it is still going on in that other dimension.   My memory for the details is not that good, but I think Aidan went into surgery about 7 pm.   In the waiting room, Kevin would get updates every 2-3 hours from the surgeon, and then he would walk down the long dark corridors to our furniture sanctuary and update me.  We were just relieved, every time, that he was still with us.   The surgeons hadn't held out much hope; everyone knew it was a slim hope for our little one.

I will have to ask Kevin for the exact time, but it was well into early morning (4 or 5 am) of October 1 before we heard that Aidan, fortified with the prayers of many and his God-given strong stubborn will to make it, was through  the transplant.    Oh, yes, and we owe a lot to the skill of the surgeons and the other health care professionals, as well.  Few surgeons, at the time, had the necessary skill and technology to attempt and succeed with such complex surgery on such a tiny, frail infant.   You have to be impressed by the years of training and discipline that all focused in on 4 kilograms of soul and flesh for those 8 or more hours.

Then we just had to wait to see him and see what post-surgery would bring, since the post-transplant period is almost as dangerous as the surgery itself, especially with an infant as compromised and ill as Aidan was then. 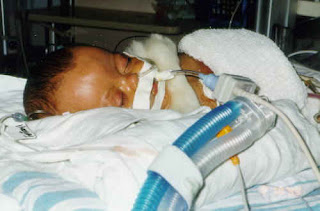 Here he is over a week later, on October 9!   It looks scary, but he is actually doing much better by this time and was more or less through the immediate post-surgical woods.   There were still many challenges ahead, and it was December before he was out of the hospital for more than a couple of days.

Today he is opening the door to tell me "Now there are FOUR kittens on the grass!"   What a difference a dozen years makes!  And I know we only see darkly, now, that what we saw and felt is only the tiniest shadow of what was going on in reality.     I hope someday to see the whole of what I only barely sensed then.

The LORD is my shepherd; I shall not want.
He maketh me to lie down in green pastures:
he leadeth me beside the still waters.
He restoreth my soul:
he leadeth me in the paths of righteousness for his name's sake.
Yea, though I walk through the valley of the shadow of death,
I will fear no evil:
for thou art with me;
thy rod and thy staff they comfort me.
Thou preparest a table before me in the presence of mine enemies:
thou anointest my head with oil; my cup runneth over.
Surely goodness and mercy shall follow me all the days of my life:
and I will dwell in the house of the LORD for ever.