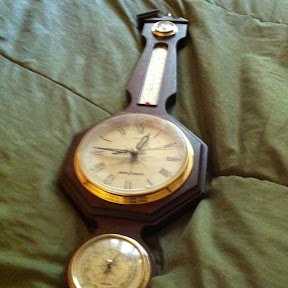 A childhood friend of my husband's gave us this clock for a wedding present, and it quietly measured the time, the temperature, and the barometric pressure of our environment for just about a quarter of a century. All it required in return was the energy derived from a single AA battery, replaced about once a year. It was one of our handsomest, most discreet, and most faithful household servants, as well as being simple and useful. It was limited, of course, but served in an exemplary fashion within its limits.

I am typing this out on the IPhone I got during one of our several travels this summer. This is a very different kind of household servant! It is a sort of factotum. It can do almost everything but mix a post-hangover elixir as Jeeves did upon first meeting with Wooster. Who knows, maybe it can do that too -- I haven't actually searched, since I'm not generally afflicted with hangovers.

From here, this post could go in all sorts of directions, and some of them I have been thinking through as I woke up this morning, but none of them were very closely connected to what I started off to say, which was something more like "tempus fugit.". It really does, doesn't it? New things replace the old; but replace isn't quite the word, because the new things fill new spaces. My iPhone can tell time and even tell me barometric pressure, though it operates from second-hand information and is thus not as accurate. And it doesn't fill the blank on the wall, but it's more portable.

In my home, I have three children now, which reminds me of 20 years ago. But they are not the same 3 children, and I have 4 children grown and in various situations out in the world, which is different. Indeed, time flies; Heraclitus says that when you step back into a river, it is no longer the same river. Yet it is, in a way, or you couldn't call it by the same name.

I suppose I will stop there. If this sounds a little bit rambling, you can put it down to experimenting in micro-blogging (it's hard to type on a tiny virtual platform) and to my feelings that this has been a very unusual summer. After all, six months ago seven children were basically at home and now only three are! This is time- lapse life, like the river suddenly doubled in speed, and it didn't help that we had such a strange, abbreviated summer here in the Sierras. (I am hoping for a long, warm, glorious, friendly fall).