This Spring Challenge from Mystie at A Healer's Geste was to choose one of your bathrooms, perhaps the worst one.   I chose the master bedroom one because it is the most used -- by the younger children, who are messier than the young adults.  It's also the biggest so it takes more work to clean.

Remember that you are supposed to


Procrastinated Jobs
There were two I had been procrastinating -- both connected with the bathtub.   One was the floor under the bathtub -- I took an "in the middle of cleaning picture" because you couldn't really see the dirt in pictures until I had stirred it up with the mop.    Then I forgot to take an AFTER picture so you will have to take my word that it is much cleaner now. The other was to thoroughly wash the bath toys.  They are BATH TOYS so they are in the water a lot but I was feeling like they were getting a slimy film on them, so I put them in a vinegar soap solution to soak..... 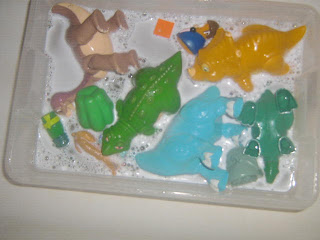 Then I scrubbed them, then I spread them out on a towel for several hours to air-dry. 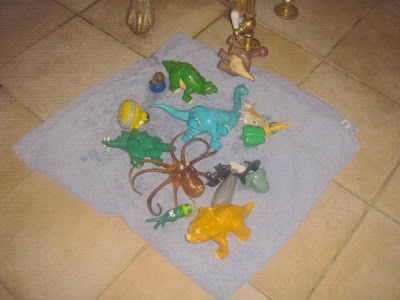 My other tasks combined making it more suitable for my family (since visitors rarely visit the master bathroom) with making it prettier.

Making it More Suitable
These shelves contain the little boys' clothes.   The top shelf is towels.  I forgot to take a "Before" picture (rather I attacked it on impulse without my camera handy) but I got rid of some outgrown stuff and organized it better so it's easier to find things. 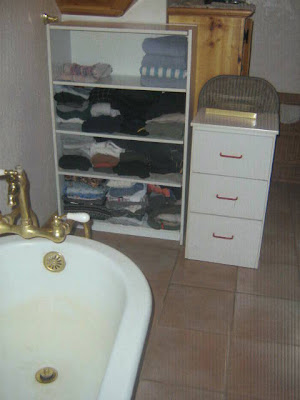 Then I tidied my shoe collection and cleaned the grime away from the floor, another procrastinated job. 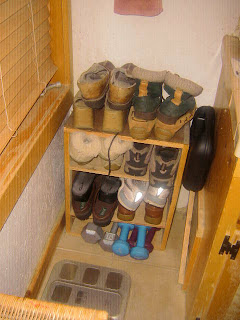 Adding a Touch of Beauty (or at least Containing the Mess)

Then I tried to make it look more beautiful by getting rid of clutter on the sink counter -- the shaving cream and razor and chapstick and nail clippers and things were kind of scattered randomly on the counter so I organized them all in the little basket so they are contained but easier to see (otherwise my husband and kids go looking for a new one of whatever it is -- out of sight, out of mind). 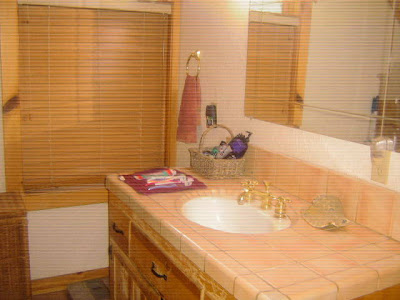 So there it is!  Thank you Mystie for motivating me to keep up with my spring cleaning!  And it's finally getting sunny outside enough so that I feel it's something like spring, even though we still have six feet of snow in the front yard!
Posted by Willa at 4:07 PM