You probably have noticed that during Lent at least I am just blogging little bits and pieces about things that strike me in books I am reading.

Pastor David Robinson talks about the "family cloister".  Cloister is another word for enclosure.   He talks about the traditional design of a monastery.  A walkway runs around the outside wall, and there is a courtyard hidden within.  Around it run a dormitory, a guest house, a chapel, and a dining hall. 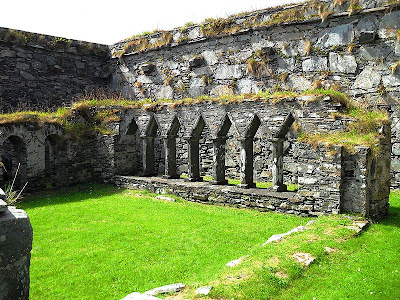 The genius of Benedictine's plan for monastic living was that it was built on a family model and carefully designed to bring out the best things about community life -- prayer, work, hospitality, order.   Pastor Robinson says that families can learn from Benedict's Rule -- they can borrow back some of the ideas for a well-designed, stable family life.

In the Rule, Benedict talks about the "four kinds of monks".   There were Cenobites (basically, communities like his); Anchorities/Hermits, who lived alone; Sarabites, who live sometimes alone, sometimes in small groups but "without a shepherd" or authority figure; and Gyrovagues, who wandered from monastery to monastery, basically taking advantage of the laws of hospitality.


A book called The Teaching of St Benedict which is public domain, says that Benedict's reforms basically eliminated these last two classes of vagrant, renegade monks.   Over time the anchorite style of life, with all its spiritual dangers only fitted to the strongest of Christians, disappeared too.  However, the book goes on:

—Nevertheless, those who live under the mild legislation of his Rule, and bow their necks beneath the yoke of obedience, must not suppose that they are beyond the reach of that perverse spirit which animated the lives of the Sarabites and of the Gyrovagi. It is quite within the range of possibility that a man should be living under the sway of an Abbot, and be bound by all the enactments of a Rule, and yet in heart be both a Sarabite and a Gyrovagus. Are there not Religious who desire to be from under the sway of an Abbot or Superior,, and to be rid of all the hampering trammels of a Rule? Are there not Religious who, though they have given up the world, cleave to it by their imperfect lives, inasmuch as they.are given up to pride, to vainglory, to itching curiosity, and to love of good cheer? How many are there who, under one pretext or another, manage to be out of their monasteries, and to flit from place to place, ostensibly on the plea of business, and with the will of their Superior, but in reality on business of their own creating and seeking, and with the will of their Superior, whom they have constrained to make his will their own? Men of this stamp, though living in a monastery, and under the sway of a Superior, are filled with the Sarabite's self-will, with the tramping spirit of the Gyrovagus, and are not of the number of those steadfast cenobitical men—except, indeed, in name—for whom St. Benedict says that he intends to write his Rule

I think that some of the directions of the Rule, which seem harsh in their use of punishment (though mild for the time) have to be understood in this light, that it was important for the whole community that bad, exploitative men should not be indulged within a place devoted to holiness.

Pastor Robinson uses the descriptions of the different types of monks to lay out some "creative tensions" that mark the family.   These are:

Some of these he goes into further in later chapters.

I like the idea of some things being "tensions"or balances rather than strict polar opposites.   Next time I read through Familiaris Consortio I'm going to see if some of the ideas in that encyclical can be thought of in terms of balances or "tensions" rather than black/white dichotomies.
Posted by Willa at 3:00 AM