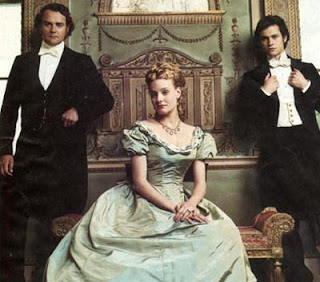 When my daughter wants me to watch a movie with her she usually picks a mini-series version of a literary classic.  Then we bake something good and brew tea and sit together and watch one episode after another.  Sometimes after an afternoon spent this way I feel like I'm walking around in a different world altogether.  It is so fun, even if my younger boys tend to get somewhat cross by the 4th hour and intrude on my Victorian or Regency world.

Last summer, we watched Daniel Deronda together.   And this vacation, after reading Mill on the Floss, and having my new Kindle PC download on my new Dell Netbook, I thought that it might be a good time to read the free Kindle book version of Daniel Deronda.

The casting of the movie was good --  particularly good with Daniel Deronda and Gwendolen Harleth.   I kept picturing the actors as I read the book.  I thought it was probably an advantage that the movie couldn't bring out all the details of Jewish history and philosophy that were gone into with much detail in the book.  The movie had to sort of evoke the fascination that the Jewish culture had for Daniel Deronda, which actually worked quite well.   I skimmed through some of the rather long passages about this  -- some of them I found rather offensive in their portrayal of a rather vulgar Jewish mercantile class, though I could understand that George Eliot was probably confronting some of the stereotypes of the time and  attempting to show their limits, and some of it I found rather abstruse in the discussion of Zionism and Kabballism of British Victorian times.

The movie departed considerably from the book in its potrayal of Henleigh Grandcourt, who marries Gwendolen.   The movie Grandcourt is much more explicitly a brute than the book Grandcourt, though the lines are very similar.   And the book is able to bring out the moral aspects of Gwendolen's struggle, her feeling that she betrayed her own standards and is therefore paralyzed and helpless, whereas the movie can only show her physical and emotional fear and disgust for the man she has married (though I think Romola Garai plays Gwendolen as beautifully as anyone could -- I liked her much better as Gwendolen than I did as Emma)

According to Wikipedia, the book is the last one that George Eliot completed, and I did notice the tone of mature reflection.  In some of her other books, Eliot's heroines are treated with a mixture of acute perception and slightly romantic idealization, but here she treats Gwendolen's flawed and yet not ignoble character with a intelligent, sympathetic detachment.  Part of the reason for this may be that Deronda is the hero and Mirah, the motherless Jewish girl, is the feminine counterpart, so she saved her romantic idealization for their part in the plot; still, I thought that the contrasts and counterpoints between the plot incidents and character traits were more subtle than in the other books by George Eliot that I have read, even if the story itself is not as powerful.

Some quotes -- I didn't notice the symbol of the chariot as it applied to the changes in Gwendolen until I did a word search, so thank you, Gutenberg : ).


Gwendolen wished to mount the chariot and drive the plunging horses herself, with a spouse by her side who would fold his arms and give her his countenance without looking ridiculous. Certainly, with all her perspicacity, and all the reading which seemed to her mamma dangerously instructive, her judgment was consciously a little at fault before Grandcourt. He was adorably quiet and free from absurdities—he would be a husband to suit with the best appearance a woman could make

Gwendolen felt herself stricken. She was conscious of having received so much, that her sense of command was checked, and sank away in the perception that, look around her as she might, she could not turn back: it was as if she had consented to mount a chariot where another held the reins; and it was not in her nature to leap out in the eyes of the world.

But Gwendolen felt some strength in saying—

"How can I help what other people have done? Things would not come right if I were to turn round now and declare that I would not marry Mr. Grandcourt." And such turning round was out of the question. The horses in the chariot she had mounted were going at full speed.

There comes a terrible moment to many souls when the great movements of the world, the larger destinies of mankind, which have lain aloof in newspapers and other neglected reading, enter like an earthquake into their own lives—where the slow urgency of growing generations turns into the tread of an invading army or the dire clash of civil war, and gray fathers know nothing to seek for but the corpses of their blooming sons, and girls forget all vanity to make lint and bandages which may serve for the shattered limbs of their betrothed husbands. Then it is as if the Invisible Power that had been the object of lip-worship and lip-resignation became visible, according to the imagery of the Hebrew poet, making the flames his chariot, and riding on the wings of the wind, till the mountains smoke and the plains shudder under the rolling fiery visitations. Often the good cause seems to lie prostrate under the thunder of relenting force, the martyrs live reviled, they die, and no angel is seen holding forth the crown and the palm branch. Then it is that the submission of the soul to the Highest is tested, and even in the eyes of frivolity life looks out from the scene of human struggle with the awful face of duty, and a religion shows itself which is something else than a private consolation.