Strengthen the hands that are feeble,
make firm the knees that are weak,
Say to those whose hearts are frightened:
Be strong, fear not!
Here is your God,
he comes with vindication;
With divine recompense
he comes to save you.
Then will the eyes of the blind be opened,
the ears of the deaf be cleared;
Then will the lame leap like a stag,
Isaiah 35: 1- 10

Aidan's neurology clinic was today, so we decided to drive Sean to school and use the hour or so in between to bring Aidan in for his required bi-monthly labs. Because it was Monday, the phlebotomy lab was crowded, but they are efficient at getting things done and Aidan, who is very shy, got some practice in conversation with the phlebotomist.

The clinic was for a botox evaluation for his hypertonic left leg. The doctor in charge of botox treatments has a huge caseload so the visit was brief. Basically we decided that he should keep receiving regular botox treatments until his growth slows down in order to at least maintain his range of motion.

With those things out of the way it was time for the real agenda for the day, which was getting a photo of the ceiling fans at the meat market in town.  This is Aidan's new --hmm, obsession doesn't seem like quite the word since that implies dysfunction.   His interest in those fans is particular, loving, intellectual, aesthetic -- and developmental, because the interest leads him to take an active role in his own life.    He started campaigning to go there and take a photo last week, when we were driving home after returning Clare and her friends to TAC.   So TODAY:  Mission Accomplished!  Long term planning, reminding and strategizing takes effect! 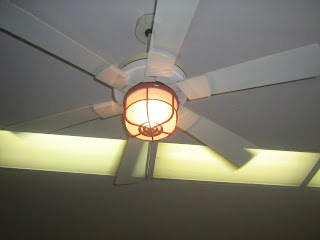 Thinking about blood draws and Botox injections and pain, and God's promises in the Old Testament reading for today....   Eleven years ago as an infant  Aidan was going through pain on a scale many of us don't experience at least until adulthood, when presumably our coping mechanisms are better developed.

He was having twice-daily blood draws at the very least.  He couldn't have a central line like most hospitalized chronically ill babies because his liver failure caused his blood-clotting factors to be severely off, so a central line would mean a bleed-out.  (even without a central line, there were some scary episodes of prolonged bleeding).   Plus, he was always losing his IVs -- his fragile veins wouldn't hold them -- and sometimes it took many, many attempts before they could restore them.   And they HAD to restore them because he needed almost daily blood transfusions and many medications that couldn't be taken by mouth.    Which made nurses very tense and grim, and of course were way harder for Aidan than for the nurses.   They say that pain is a categorically different experience for children, especially for babies, than for adults.   Because they have so little sense of time and perspective and reason, the pain and fear can be psychically overwhelming.

When he was going through this intense, recurring pain, back in infancy, all I could do was stand near him and hold his little arm or hand firmly and say, "Oh Aidan... it will be all right.   It will be all right..." and sing and try to distract him, help him move past the pain.    I couldn't even hold him close because of all the tubes and because the nurses needed a clear field.  I would hold him as close as I could, leaning down towards the isolette and gathering the free part of his body toward my heart.  I would pray that he somehow would know that it was true against the painful evidence, that it really was all right,  that somehow he would feel the arms of Our Lord around him, that he would not feel completely alone and lost in a world where people with kind voices brought him pain.

When I think about all that, I am amazed at Aidan's resilience and trust.  Yesterday he asked me, "Are we having Botox at this clinic?"  (the injections are quite painful and EMLA doesn't help).   When I said no, he believed me and dismissed the worry from his mind.  I could tell he really did dismiss it, because he was peaceful going into the waiting room.   When I told him this morning that we did have to get a blood draw before the clinic, he was able to deal with that unpleasant anticipation and focus on the fans at the Meat Market and on taking pictures.    Though shy, he could chat a bit with the phlebotomist and the doctor.   He even asked if he could show the photos of the fans to the doctor.

Can I do this kind of thing?  When I'm being hurt by things in my life, can I focus past it on joy?   Can I somehow believe it's all right?  Can I have that kind of trust that He who permits pain and inadequacy is still somehow yet my friend?   Can I feel Him reaching down and enfolding me?   Can I look upwards and try to turn my mind to the beauty, truth and goodness of things?   It's harder for me than it is for Aidan, apparently.
Posted by Willa at 3:33 PM