Ways That Good Parents Can Mess Up Their Children 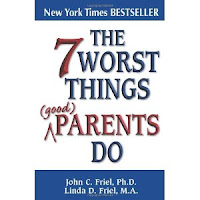 .... according to The Seven Worst Things Parents Do

You can find Chapter 1 here
and preview the book here

I think I got this book when Aidan was in the hospital at San Francisco and I was ending up having to spend way longer there than we had originally thought, so I didn't. Have. Anything. TO! READ!  And that is not good.  So I hit the university medical bookstore and found a couple of books that weren't written for med students, and this was one of them.


The edition I have didn't have the title that you see above, where (Good)  is added into it.   I can see why the authors added the GOOD qualifier because in the edition I have, they had to explain that they weren't talking about the Worst Things ANY Parents Have Done, which would be a whole different book (and would be called The Brothers Karamazov).

They are talking about the worst thing the kind of parents that would read a parenting book and really try to learn from it would do.  These parents would make the kind of mistake that comes from Trying Too Hard to be everything to their children.   The book suggests that trying to be everything to your children will stunt their development.  This is, of course, true, and it is something that Charlotte Mason mentions as a problem with well meaning middle class parents in her time, too.

What mistakes could you make if you falsely thought your job as a parent was to provide EVERYTHING to your kids?  You wouldn't leave anything meaningful up to them, because you could do it better.    You would always be trying to develop your child's (extraordinary, of course) potential so you'd always be hunting for and providing them opportunities and activities.   You would  try to be your child's entire support system because you could be a better influence than any kids they might become friends with.  At the very least, you would always be the mediator between your kids and the world.   You would work your family rhythm and rules around the child or children, not just when they were newborn or ill, but all the time.

To do all this you would have to ignore your own emotional and spiritual development because that would take energy away from your child-focus.  You would also have to make your marriage a satellite to your child-focus; you might even feel resentful if your spouse wanted some attention.

Since you had invested and sacrificed so much in the child-raising, the  natural corollary would be that you would try to make your child live out your dreams in some way or another.  Perhaps you would expect them to be intellectual or athletic wonders or, more subtly, be more "emotionally honest" or more "free" than you got to be (often meaning, more badly behaved or discourteous to others or lazy).  In other words, your life would become identified very deeply with your child to the point where you couldn't see him apart from yourself.   Your natural tendency would be to protect yourself by protecting him from any kind of failure.  Either that or you would eventually get to the point where you were so burned out by all this that you pushed your (unendurable) child more or less out of your life.


I am fairly sure I have fallen into almost all 7 of these behavior patterns at some time in my life.    And in some ways, they are extremes of normal healthy parenting, which is actually the main point of the book.

When you are raising children it IS your job to shelter them.  Your marriage IS ordered towards care of children as well as towards conjugal companionship.   It IS good to have flexibility in the routine and regulations.    It IS good to have a good relationship with your children, to give them opportunities to succeed, to invest time and energy in their development, to have high hopes for them, even to raise them up in your footsteps to a certain degree (this was the way parents raised children up till fairly recent times, after all).

So the problem isn't the things themselves.  It's making the dysfunctional extremes into working principles for how everything runs in your family.   Or so it would seem.

The book presents an important disclaimer.


There you go, that covers a lot of the bases! Though emphasizing one side of the thing,, the book also cautions against over-steering into the opposite problem.   The healthy way to parent is to work at your marriage, work at making yourself better, work at supporting and teaching your children ("raising adults not children" as they say) and work on the family relationship as a springboard to success rather than a glass bubble.

So -- a fairly practical book, with a cheerful commonsensical tone.   Words like "worst" and "dysfunction"  make me squirm, so whenever I see this book on my shelf I always feel uncomfortable, especially since the title is in an assertive red font, but when I pick it up I usually find it sensible and fairly encouraging.    I don't think it's really helped me that much, because a lot of the recommended advice are towards things I already do, and where I don't do things the way the authors recommend, I don't really want to change very much.  But I do think the basic point, that you don't do your child any favors by orbiting around him as if he was the center of the universe, is an important one.
Posted by Willa at 9:51 AM