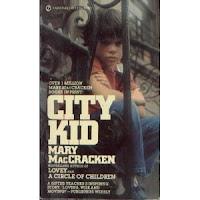 Level with your child by being honest. Nobody spots a phony quicker than a child.

Mary MacCracken was a teacher in the 70's who wrote several semi-autobiographical books about her experiences besides City Kid.... A Circle of Children, Lovey:  A Very Special Child,  and Turnabout Children.  City Kid is written after the first two, which were set in a private school for extremely emotionally disturbed children.

Karen G has a post about Mary MacCracken:  A great teacher.
There is a PDF article called Tory Hayden's Teacher Lore:  A Pedagogy of Caring which discusses Mary MacCracken's work a little.  Otherwise I couldn't find a lot about her.    So I don't know what became of her in the last 30 years or what impact her work had on educational theory in later years.

That "pedagogy of caring" is interesting because it also seems to describe what Sylvia Ashton-Warner practiced and what possibly drew John Holt to recommending homeschooling after several years of trying for school reform.

In City Kid, the school she was working for, where she worked with emotionally disabled kids, had closed, and in order to continue to teach, MacCracken had to go back to the university in order to get her degree and certification.   In her 40's, with a blended family of several teens and young adults, she was attending classes with kids young enough to be her kids.    Part of the book describes her university life and the other part describes a special interning opportunity she got to work in a pilot program that focused on emotional therapy for problem children.    She describes vividly the discrepancy between university classes, completely closed away from any contact with kids and even detached from very much discussion of real issues of how to get through to kids, and her actual sessions at the school where she was assigned to work directly with one kid, even if that was only for 3 1-hour sessions a week.

The child she worked with was Luke, a 7 year old from the ghetto who was labeled as resistant and unreachable because no one who tried to intervene was able to get him even to talk to them.  He was falling way behind in second grade because he drifted and missed lots of days at school.  He also liked to set fires, which had gotten him into trouble with the law several times.

MacCracken, however, was able to get him to communicate with her.  She started off by asking him to draw pictures and then tell her what they were about.  She wrote down what he said, which delighted him.   Later on she is able to win his trust enough for him to show her his hiding place by the water tower, where his father would put the boy up to guard while he shot up.  She meets his mother and his little sister and brother who he has to take care of while his mother is working to support them.  And later, by working with a word box and a game show format, and other such simple teaching devices, she is able to bring him up close to grade level in his work.  His attendance record goes way up at the school.

But then, in the fall of the next year it turns out that Luke has been "held back" a year, so that he is kept in second grade with his little brother,  and it looks like all their progress in trust and learning will be lost completely.   The story is very interesting reading, but what is particularly interesting is the way she works with kids through love and warmth, trying many different kinds of ways to break through to them, trusting that the child will show her how to teach them.

I kept the book because her love for working with kids and her commitment to the kids themselves as individuals is very inspiring, even though I don't have her natural interpersonal gifts.   As she says, honesty and directness seem to reach through better than many techniques and methods -- most of her teaching materials were improvised, cobbled together from old school textbooks and the like, but she still managed to get the kids learning and confident about what they could do.
Posted by Willa at 7:59 AM