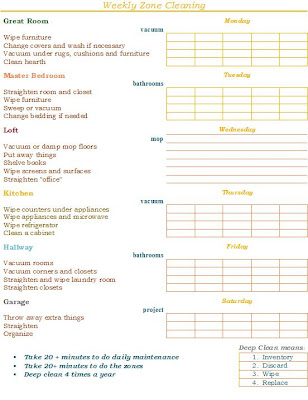 I have been doing really well with my Level One maintenance for housework. Since it's a modest goal -- vacuum twice a week, sanitize the bathrooms twice a week, and mop once a week -- I usually get to it without too much of a problem. It's actually sort of nice to have a housecleaning project all laid out for the day. I allow myself 30 minutes but realistically now that I'm more regular it only takes 20 minutes most of the time.

Level Two, where I focus on different zones in the house by day, wasn't going as well. I find I need concrete tasks to do. So I made this checklist. I thought if I do just one or two of them in a given week, over the course of a month I would probably hit them all. The zones are in the order of days I do them in -- Monday the main room, Tuesday kitchen, Wednesday hallway and associated rooms, Thursday upstairs loft, Friday master bedroom, Saturday garage and porch/deck/yard (homeschool planning and filing in the winter months).


Yes, a form! I used to make them all the time, and some are on my sidebar, but I've gotten to prefer paperless and computer-type lists and plans. I can find things when they're on my computer, whereas when they're in a binder I never bother to go look at them even if I know where they are. But this form I'm going to tape on the side of my refrigerator.

Level Three -- deep cleaning -- is scheduled for 4 times a year. That would be March, June, August and November. Those aren't exactly even quarters, but I have more time in the summer and I usually clean just before Advent, and during Lent. If necessary I could consolidate the two summer clean-ups into one.


Readers are probably already aware of the Reasonably Clean House series at Like Mother, Like Daughter. Reasonable is a biggie -- it allows for homeschooling several who are all at home much of the day, and for babies and toddlers, and a rich life. And the series is beautiful .

I only had to take out one set of quotation marks for this post. It was for the first use of zones. You see how strange that sentence would look if the z-word wasn't set aside somehow? I think I put them in when I want to mark a word as being used in a slightly unusual way. When I'm writing about books I do it more often because most books seem to have a set of words that are defined in a rather unique way. I first became conscious of this when I read Mortimer Adler's How to Read a Book -- I hadn't noticed it, but he was right. Almost all non-fiction books in particular have a set of words that would be put in bold, or in a vocabulary set, or both, if they were in a textbook. Off the point, but I'm trying to decide what to do about it -- just have a vocabulary set at the beginning of the post? I don't think that would meet my goal of simplifying my writing. Or maybe just devote a paragraph to explaining definitions. I think Aristotle does something like that. I'll have to look around and see how other people write about non-fiction-type books.
Posted by Willa at 5:23 PM