The End of Overeating 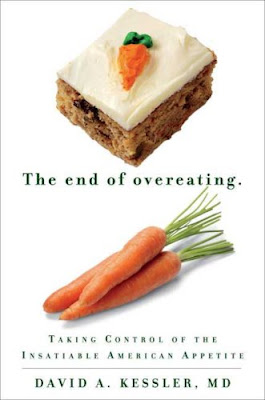 I haven't read a book-in-a-sitting for a very long time now -- since before Lent? We were at the library today and I found this book called "The End of Overeating: Taking Control of the Insatiable American Appetite" on the shelves. So while the kids were watching Aladdin with their big sister who is home from college now, I read the book. I'm glad I did.... for one thing, the book was written by a former dean of the medical school at UCSF where Aidan got his liver transplant -- it almost feels like our alma mater in some ways : ). For another thing, it presented several things that seemed to me to be useful in thinking about overeating.

By the way, just look at that cover -- I totally crave the carrot cake and could easily live without the carrots themselves, even though I rather like carrots. Which is sort of the thesis of the book.

Dr Kessler (the author of the book) mentions that over-eating is not JUST a problem with the overweight or obese population. Sure, it is the rapid climb in average weight of the American population since the 80's that has captured the attention of the medical community. But the phenomenon of over-eating does affect non-overweight people too. He describes a person of normal weight who suffers from obsession and cravings similar to some other people who are overweight, and says that in one study, about 17% of the "lean" population (his word, not the one I'd use to describe myself even when my BMI is below 22) has food obsessions (compared to something like 45% of the overweight or obese people in the study). Even if these "lean" people do not have the medical and other problems that come with overweight per se, they have some of the other issues -- a fear of lack of control, spending excessive mental energy thinking about eating or planning eating, low self-esteem, the health problems that come from eating too much of the poorer quality of food that usually comes with obsessive or craving-oriented eating. People like me who have been eating rather poorly since adolescence are probably more subject to other health problems even if this doesn't show up in the statistics as a food-related issue. And of course, there are the spiritual and emotional components. One doesn't really want food to be in control. Dr Kessler quotes several people, successful in their careers and lives, who feel heartbroken to be so out of control when faced with a bowl of M&Ms or a tray of fries.

This brings us to another interesting thing that I've never really seen discussed thoroughly in other books about weight control. He researched extensively about the way that the food industry packages food to make it appealing to an increasingly hurried, relatively affluent American society. Some of the factors that go into what he calls "hyperpalatability:

The main thing biologically is the fat combined with the salt or sugar. These are things that we naturally seem to crave and which provide intense positive feedback. He provided a lot of studies that showed that sweet alone is not very appealing (hardly anyone but a small child eats table sugar) but sweet combined with fat is biologically difficult to resist (a donut or Starbucks latte) and so is salt combined with fat (chips, peanuts). If you add unusual flavorings or overlays of texture (easy to do in these days of chemical flavorings and extensive processing) you get a sensory experience of great intensity. This has the effect of providing a thrill almost comparable to a drug. The food plays on the dopamine and leads to a conditioning which continues to reinforce itself. If you add in emotional connotations -- say, the relaxing effect of a restaurant with friends after a busy work day, etc. -- then the food itself has even more effect.

The food industry tries very hard to separate their product from competitors by introducing novelties and constantly improving past efforts.

Reading all this had a sort of aversive effect on me. It also made me realize how many of my food decisions are based on desire for stimulation and comfort -- which is really what processed, fatty, salty or sweet food provides. Sweetness and fat especially give the eater a kind of euphoria. And there's also entertainment in a variety of textures and tastes, at least for me. This is another thing he mentions -- the entertainment factor in food, which the industry promotes through flavor and texture, and through advertising as well. Eating for entertainment is affordable for almost everyone. Some people might eat Parmesan-Crusted Sicilian Quesadillas at TGIF or Southwestern Eggrolls stuffed with smoked chicken, black beans, corn, jalapeno Jack cheese, red peppers and spinach at Chili's, others may avoid those places for pocket-book reasons, but almost anyone can go get a box of Little Debbie's Swiss Rolls for about a dollar at the store, or spicy fries at the burger joint for a similar price.

And when you're a stay-at-home mom who avoids stores and restaurants, you still have the temptations in your own kitchen. He says they even add sugar to bread to make it more palatable, not to mention sugar and salt in peanut butter. And it's sooo easy to make peanut butter cookies or brownies (though I can usually resist this type of thing fairly well unless I'm already quite weak for some reason).

That's another point he mentions -- that it's easier for the inhibitions to break down when one is emotionally overset for some reason. In some ways this feeds into the overeating cycle because overeating and weight gain give longterm effects of discouragement and feeling out of control, and ongoing mental food battles are stress-producers.

Understanding the stimulation and habituation factor in eating, I hope, as well as the emotional backlash components, will help me be more mindful in avoiding my own traps. I've made progress since my high school and college days. I used to be able to eat 12 Milky Way bars in an afternoon after school -- stress-busting, anyone? But there are still triggers in my environment. For me, it seems that telling myself I won't buy this or that just sets off a panic attack of deprivation, but actually thinking of the sugar and fat and their addictive effect may make me not WANT to buy these things so they can mess up my brain. There are a lot of sugar/fat/salt type things that don't push my buttons, fortunately. My husband buys ice cream bars sometimes and I can let the kids eat all those without a problem. My only trap there is that watching them eat ice cream bars makes me feel like I "owe" myself some equivalent indulgence more to my taste.

So just trying to analyze more objectively the things that DO push my buttons, and WHY, might help me to avoid that compulsion/guilt/torment cycle which he also perceptively describes. He says that the very cycle of compulsion and guilt/anxiety sets up a state that can only really be resolved, or so it seems, by giving in. Eating the food provides temporary relief from the torment of the decision -- he describes a woman who was jittery and anxious facing her particular food drug (Snickers bar) but who became peaceful when she gave in and decided to eat it, even before she actually tasted the candy bar.

He doesn't go into as much detail about solving the over-eating problem as he does about the psychology of the problem itself, which was all right with me, because there are a lot of books devoted to helping in that area. His suggestions for overcoming over-eating are fairly simple and will be familiar to most who have read diet books. He suggests making rules for oneself in given situations -- a "track" to replace the habitual giving-in one -- as specific as possible so there doesn't have to be conflict or willpower involved. In any case, I wouldn't read this book hoping that it will immediately end one's overeating by itself. I liked the book mostly because of its detailed explanations of the "incentive salience" which he defines as a learned association that predicts reward -- we learn to "want" something that we once "liked" for whatever reason. And the way our Xtreme American food reinforces this by producing an explosion of sensory stimulus. That was useful information for me and helped me objectify an emotionally invested topic. I still would like to try one of those deep-fried tortillas stuffed with smoked chicken, black beans, corn, jalapeno Jack cheese, red peppers and spinach though.....
Posted by Willa at 5:32 PM