The refrain of this song always runs through my head on Easter. A friend gave me a very static-y tape of the song back when I was a teenager working at the fish storage plant in Anchorage. I was just starting to take more seriously my then-dormant childhood faith at that point so I guess it resonated with me even though I wasn't and am still not a big fan of Christian pop.

The song is written from the point of view of St Peter, and I've been pondering how terrible those 40 to 50 hours between his denial and the women's testimony must have been for him. He did not fully understand Christ's role, and though according to the Catholic Encyclopedia his faith never wavered (the song has perhaps some poetic license here) his courage certainly did, and he must have been plunged into horrible turmoil at his own weakness and the cruel fate of Him he loved. I was wondering whether Jesus was praying for him to avoid some sort of impulsive act of self-destruction when He said in Luke 22:

"Simon, Simon, behold Satan has demanded to sift all of you like wheat, but I have prayed that your own faith may not fail; and once you have turned back, you must strengthen your brothers." 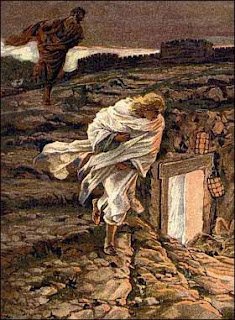 As a sinner myself, who never really lost my faith entirely but let it be muddied by cowardice, anger and self-indulgence, I can share in Peter's joy when he realized that the story he had played such a part in wasn't a tragedy, but in spite of all appearances, a tale of a glorious victory.

I always like what Chesterton says -- it reminds me that one doesn't have to have stellar personal qualities in order to be saved -- Christ founded his Church upon sinners and weaklings, and the Church does not rest upon human power, as St Paul says in 2 Corinthians 12:9. Here's Chesterton:


WHEN Christ at a symbolic moment was establishing His great society, He chose for its corner-stone neither the brilliant Paul nor the mystic John, but a shuffler, a snob, a coward -- in a word, a man. And upon this rock He has built His Church, and the gates of Hell have not prevailed against it. All the empires and the kingdoms have failed because of this inherent and continual weakness, that they were founded by strong men and upon strong men. But this one thing -- the historic Christian Church -- was founded upon a weak man, and for that reason it is indestructible. For no chain is stronger than its weakest link.