Recently this blog has even been boring me.... yawn. I think the problem is that spring refuses to come up to our part of the mountains. Even when it's nice and sunny, like today, the volume of snow has an icebox effect -- it perpetuates itself, endlessly. I expect to look out at stale, grim but still-enduring snow in mid-June.

So why this means a boring blog? Well, traditionally I journal a lot in March and April, and take pictures. But there's nothing much different from February here, in appearance or action.

But maybe I'll journal a day just to keep up with the circannual tradition.

Let's see -- last year AND the year before at around this time:

The third one originally said "end our Charlotte Mason term". This is because, it seems, every February to June we tended to use Ambleside. That obviously didn't happen this year, but otherwise, our pattern remains constant.

I wake up at 6 am and lie in bed a bit trying to collect my thoughts for the day.

I get myself dressed and get downstairs where I: feed the dog, empty the dishwasher, let the dog out, start the fire, gather Sean's lunch with icepack etc and place on the counter, and start his breakfast (if it's not Monday or Friday -- on those days I drive Brendan into town for his college classes and take Aidan to therapy -- OT on Monday and PT on Friday).

Aidan gets up and I get him breakfast, and give Sean his breakfast. Then I either drive Sean to the bus-stop (Tues/Wed/Thurs) or drive to town (Mon/Fri). Kevin works at home, so he stays with Paddy and Kieron when I'm away.

If I go to town I try to get to mass -- a hurried run across traffic. Then I run errands if necessary, then take Aidan to therapy. We get home just before noon usually and by that time, very often Kieron is finished with his K12 work. But Paddy can't do his on his own yet. So I usually fix lunch then work with him for a while on his academics. If he starts getting squirrelly we take a break and I do some housework while he plays or reads. He reads much more fluently than he did last year and can often be found curled up with a book in front of the fireplace.

On the days when I'm at home, I have a "quiet time" after Sean leaves and before the other boys wake up, and usually make muffins or something. In theory I read to them in the morning and then work on catechism, but we've had trouble restarting this habit since we all got so sick in February. We were also going outside for a walk around lunchtime but the blizzard last week and then a few days of weather in the 20's sort of squelched us.

I usually do some decluttering and cleaning in the early afternoon, run any local errands or make phone calls. Around 2 pm Paddy usually clamors to finish his work if he hasn't already finished. At about 4 pm they get some time to play computer games and I have a rest or a bath.

Last year Sean had track and didn't get home till 6:30, but this year he did basketball in the winter and is not doing a spring sport. He sometimes stays after school to work out with other kids who want to get an early start on football season, but on other days he comes home at the regular time.

The K12 work has taken on a momentum of its own -- in the fall it felt stressful and I was always afraid we would start falling behind, but now, Kieron just tackles it first thing, and Paddy gets to his after he's had breakfast and played or read a bit. If there is something that takes longer -- like art or science -- sometimes we do it in the evening or on weekends. They have the hang of how the lessons work and Paddy's gotten really good at what they used to call "recitations" back in the 19th century and earlier-- a sort of review Q&A session at the beginning of most lessons. He is unlike the other kids in that he enjoys narrations and discussion prompts. I'm not sure if it's just because he's gotten used to it through repetition this year or because he is naturally more verbal and extroverted. Perhaps a bit of both.

Evenings are pretty much like they were last year. I usually read or talk to a family member, they play, I read to Paddy in the evening and then the little boys and I go to sleep while fairly often, the older kids and Kevin watch a movie.

There are various incidentals not mentioned here, of course. This is just the basic pattern of home life.

One thing that has changed from last year, of course, is that my daughter is at college and my oldest son graduated and is now working for his dad in the computer game business, and living at home in order to focus on paying off the college debt. So the quantity of household members remains constant, but a slightly different cast of characters.

Paddy was studying impressionist painters for art and was assigned a portrait -- he did this one of Liam (original photo on the side). Art's still probably his least favorite subject but he's gotten a bit more into it since the beginning of this year. 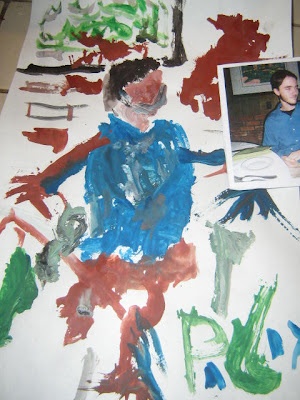