I had one stressful day last week. Paddy didn't want to do his schoolwork. Kieron was delaying and Aidan was in a bad mood. After that things got better and we've evolved a daily routine that actually might work well for us. I put it below. 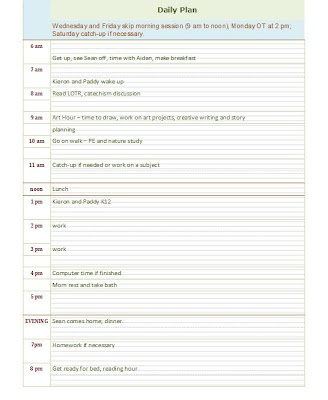 Or view it in docx form.

One of the things Paddy was balking most about was, oddly, the art projects. I guess he hasn't had past experience with "assigned" art and I can understand his feelings of resistance. So I started something that I was thinking about during the summer -- having a morning free Drawing/Writing time. It's going to be mostly undirected but I think once Paddy is warmed up he won't mind doing a little directed work.

So on Friday we had an art hour and it went really well. The only problem was that Aidan gets stressed for some reason by the other kids doing crafts or art. So he ended the hour in a horrible mood. Consequently I'm putting an outdoor hour in right after the art hour. That way we can go for a walk, get some exercise and fresh air and hopefully come back refreshed. Aidan loves the outdoors and hasn't been able to go outside as much because our neighbor told us that a big mountain cat has been seen in our area.

Kieron seems to be inclined to start working on his K12 academics about noon, after an early lunch. That was frustrating me but I made the decision to try it his way and see if it might actually work. The main question is if I can survive the afternoon (I usually get sleepy in the early afternoon). But Kieron doesn't need THAT much of my involvement. I just have to be there and ready to supervise or discuss or guide. If he doesn't get his work done by 4 pm I will give him a homework hour at 7 pm which is when Sean does his homework. If that's still not enough time I can plan a "catch-up" hour just before lunch in the morning for him to tie up loose ends. And there's always Saturday. But so far he seems to be able to finish his core academics in about 3-4 hours and the extras, like the art projects and free reading and physical exercise, in the hours around that time.

My planned routine is to work alternately with Kieron, Paddy and Aidan, about one subject per hour. So that way my K12 work takes about 5-6 hours. The read-alouds, time outside, and art time DO count towards California's requirement of a 5 hour school day, but I consider them fun rather than work, so I'm not really counting that as time on task.

I'm also planning to have Paddy do a bit of handwriting during the weekends to take some of the time pressure off during the week. He is "behind" in this one area. I don't want to push him but I think that I probably haven't paid enough attention to getting him interested in using his pen and pencils and markers. He has started writing with more confidence already since we have been working on it the past two weeks.

Probably more than anyone needed to know, but I thought I'd write it out so I can remember it!
Posted by Willa at 7:17 PM