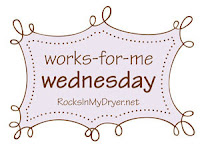 So, I haven't done a Works for Me Wednesday for quite some time, but I thought I would jot this one down while I'm thinking about it.

I deal with mood swings, which since I'm a middle-aged woman seem to come fairly predictably in one-month cycles, though they also crop up in a different form on anniversaries which have sorrowful meaning for me. During the "down" times I often wake up at 2 or 3 am. Remember LM Montgomery's "white nights", especially in the Emily books?

Emily fully expected she would be sent home to New Moon in disgrace. Aunt Ruth would stonily decline to keep such a girl any longer in her house -- Aunt Elizabeth would agree with her -- Aunt Laura woudl be heartbroken. Would even Cousin Jimmy's loyalty stand the strain? It was a very bitter prospect. No wonder Emily spent a white night. She was so unhappy that every beat of her heart seemed to hurt her. And again I say, most unequivocally, she deserved it. I haven't one word of pity or excuse for her.

When I first read her books, as a pre-teen, I could only imagine what she meant. I know exactly how it feels, now.

Anyway, during the white nights, I've learned to pray, not always in words but in silent oblations. Sometimes suffering can be a prayer, and I don't think suffering HAS to be exactly grounded in reality in order to be valid. When you think about it, there are two things going on with suffering -- the "matter" of it, and the reaction to it. Like school and learning, they are only incidentally related to each other. There have been times when I've had a lot going on objectively to complain about and felt little desire to complain, and other times, when there is apparently little to complain about where I feel any amount of pain. So I believe that even semi-irrational mood-swing suffering can be turned into participation in the Via Dolorosa. After all, in world terms there is much reason for sorrow, yet sorrow has to be grounded in caritas in order not to simply turn into pity-partying.

The other thing I've learned, in the down days when everything around me looks discouraging, is to make lists. It works for a melancholic-phlegmatic like me because most of the time my phlegmatic self acts as a stabilizer and as a bit of an anesthetic. It lets me ignore and endure things that are really wrong that I could change. When my melancholic side takes over, it is powerful and perfectionist but not temperate. Writing down everything that I see in its worst light during the melancholic moments is like a message in a bottle to my phlegmatic side. That way I can address the "bad things" in a calmer way when my emotional ship is more on keel. What a lot of mixed metaphors there! The basic point is that rather "change-everything-in-the-house-right-this-minute" I just ponder and list and wait until I'm saner to make actual changes.

Anyway, this might not work for everybody but has been fairly helpful for me. It doesn't take away the pain but it helps to redeem it.

By the way, I like this temperament test. The questions are sort of silly, but it seemed to peg my temperament accurately (and my daughter's, too) -- and it tells you whether your key temperaments operate as "strengths" or "weaknesses". I came out like this:

Even though my melancholy side is by far the strongest, it's largely my phlegmatic side that I count on to help me function. That was interesting to me.
Posted by Willa at 11:16 AM