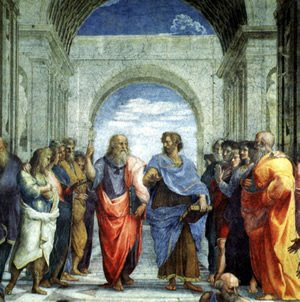 CLAA has the quote from Plato that I mentioned in my last post on its main page as a sort of footer. So if you go to the site, you have to scroll down to the bottom. I thought that since I put the quote in its original context in the Republic I should also in fairness put down how it looks in the context of one of the articles on the CLAA site (I couldn't find the specific words on the site, but came across it posted somewhere else).

Families must also commit to cultivating a spirit of sobriety and maturity among their children, rather than allowing the perpetual childishness that ruins American children. Children are considered morally accountable by the age of their first confession and this should be taken seriously. There is no excuse for inordinate play, entertainment, etc.. "Youth is the time for extraordinary toil." said Plato.

Now, diverging from this topic to one that is different but overlaps slightly, we were having an interesting discussion on the Real Learning board about a JT Gatto book that I haven't read yet, but have requested from the library. The discussion revolved around whether our society was "juvenilizing" (not a word, I know!) our kids.

In my view you can "dumb down" or infantilize kids by keeping them in a child-ghetto either of "inordinate play" as Mr Michael says, OR of developmentally inappropriate academic drudgery.... this is sort of the Scylla and Charybdis that educators have to steer between. So often what you see in the education wars nowadays is veering from one extreme to the other.

I like what Plato says on education in The Laws ..... he doesn't think play itself is wrong or "childish", but he did think that play ("ordinate" play, of course) was important in the future life of a free man.

Ath. Well, then, if I tell you what are my notions of education, will you consider whether they satisfy you?

Cle. Let us hear.
Ath. According to my view, any one who would be good at anything must practise that thing from his youth upwards, both in sport and earnest, in its several branches: for example, he who is to be a good builder, should play at building children's houses; he who is to be a good husbandman, at tilling the ground; and those who have the care of their education should provide them when young with mimic tools. They should learn beforehand the knowledge which they will afterwards require for their art. For example, the future carpenter should learn to measure or apply the line in play; and the future warrior should learn riding, or some other exercise, for amusement, and the teacher should endeavour to direct the children's inclinations and pleasures, by the help of amusements, to their final aim in life. The most important part of education is right training in the nursery. The soul of the child in his play should be guided to the love of that sort of excellence in which when he grows up to manhood he will have to be perfected. Do you agree with me thus far?

Cle. Certainly.
Ath. Then let us not leave the meaning of education ambiguous or ill-defined. At present, when we speak in terms of praise or blame about the bringing-up of each person, we call one man educated and another uneducated, although the uneducated man may be sometimes very well educated for the calling of a retail trader, or of a captain of a ship, and the like. For we are not speaking of education in this narrower sense, but of that other education in virtue from youth upwards, which makes a man eagerly pursue the ideal perfection of citizenship, and teaches him how rightly to rule and how to obey. This is the only education which, upon our view, deserves the name; that other sort of training, which aims at the acquisition of wealth or bodily strength, or mere cleverness apart from intelligence and justice, is mean and illiberal, and is not worthy to be called education at all.

Over at this blog I found a couple of links to some more thoughts on the question of retaining too much "childishness" for too long. This one by Marvin Minsky was interesting:

... the evidence is that many of our foremost achievers developed under conditions that are not much like those of present-day mass education. Robert Lawler just showed me a paper by Harold Macurdy on the child pattern of genius. Macurdy reviews the early education of many eminent people from the last couple of centuries and concludes (1) that most of them had an enormous amount of attention paid to them by one or both parents and (2) that generally they were relatively isolated from other children. This is very different from what most people today consider an ideal school. It seems to me that much of what we call education is really socialization. Consider what we do to our kids. Is it really a good idea to send your 6-year-old into a room full of 6-year-olds, and then, the next year, to put your 7-year-old in with 7-year-olds, and so on? A simple recursive argument suggests this exposes them to a real danger of all growing up with the minds of 6-year-olds. And, so far as I can see, that's exactly what happens.

Our present culture may be largely shaped by this strange idea of isolating children's thought from adult thought.